Privacy-oriented zkDAI is a Thing now

Stablecoins have become  a very big part of the crypto asset industry. Although they lack privacy, many people are willing to experiment with them for a variety of reasons.

Dai, the popular stablecoin issued on the Ethereum blockchain, is getting a privacy component.

zkDAI is a Different Type of Stablecoin

As the name suggests, these are privacy-oriented counterparts of the traditional stablecoin.

To mint these coins, 10,000 normal DAI has been put into a contract.

This marks an important milestone for the stablecoin, as well as the future of privacy on the Ethereum blockchain.

Just because zkDAI exists, doesn’t mean anyone can use it as of yet.

It is not a currency supported by exchanges, albeit DEXes should have no problem integrating them in the future.

It also appears that the Aztec protocol team wants to add privacy to many other tokens issued on Ethereum in the future.

Doing so would certainly be interesting to behold.

In this modern day and age, privacy becomes all the more important when dealing with finances.

In the cryptocurrency world, there are very few privacy-oriented options, other than alternative crypto assets such as Monero and PIVX.

The post Privacy-oriented zkDAI is a Thing now appeared first on The Merkle Hash. 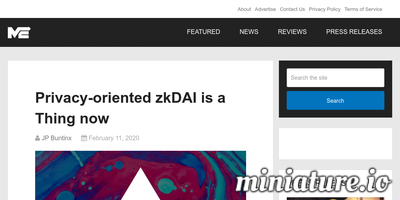