The trustee of the now-defunct crypto exchange, Quadriga CX says the sell-off of the platform’s assets raised $30 million. This contrasts with the $171 million in claims that has been filed with the trustee by Quadriga creditors. Consequently, Ernst and Young (EY), the accounting firm mandated with administering Quadriga’s liquidation process, says it will not be able to reimburse in full all the claims.

As shown in one report, the trustee says it “received completed claim forms from 17,053 creditors of the exchange while a total of 42,957 claims were filed.” Explaining the higher number of claims filed against the actual number of creditors, the report suggests that some creditors may have signed more than one claim form.

In its court motion, EY also reveals that the claims filed by users and creditors are composed of both cryptocurrencies and fiat. The motion lists the cryptos claimed as follows 24,427 BTC, 7,723 bitcoin cash,17,934 bitcoin gold, 7,098 bitcoinsv, 65,457 ethereum and 87,031 litecoin.

Still, EY argues that “roughly one-third of the forms have a defect” which the accounting firm says will be too costly “to follow up and fix.” Consequently, the trustee wants the court to rule on its proposition to evenly distribute the available funds.

In its request, the trustee says:

EY is asking that user claims all have equal footing, as sorting out who would have priority for distribution on a claim by claim basis would be inefficient, costly and a significant drain on estate assets otherwise available for distribution.

Meanwhile, EY’s motion appears to validate some of the longstanding allegations against Cotten. Explaining the discrepancy between Quadriga’s assets and liabilities, the motion explains:

“Mr (Gerald) Cotten proceeded to trade these account balances with affected users that had deposited real assets, as such, Quadriga’s assets likely never matched the liabilities owed to affected users.”

Cotten’s death in December 2018 sparked controversy after it emerged that there had been no provisions for a handover or retrieval of private keys to the exchange’s cold wallet. The exchange subsequently shut down a month later leaving thousands of users in limbo.

Now, after nearly two years of waiting, Quadriga CX users and creditors are now expected to get the reimbursement of a portion of their funds.

What are your thoughts about the reimbursement offer made to Quadriga CX creditors? Share your views in the comments section below. 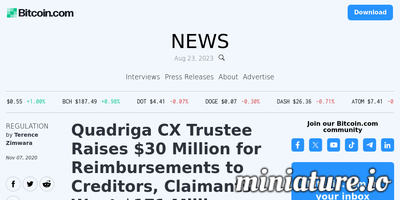