Reddit User Gets Through a SIM Swapping Attack Without Extensive Losses

It appears that the number of SIM swapping attacks continues to rise. This trend is particularly evident in the cryptocurrency space.

In the post, the user explains how he was targeted, yet seemingly managed to not lose any funds in the process.

It is still too early to say for sure, as not all of these attacks result in immediate loss of money.

In the span of a few minutes, the individual received numerous worrisome text messages.

He was informed as to how a recovery code was issued for his Yahoo email address and Abra account.

While no suspicious activity was found initially, these accounts will need to be monitored closely.

At the same time, the user also noticed he ran out of cell phone service, indicating the SIM swapping was in progress.

The objective of the perpetrator was to intercept these account recovery codes and take advantage of them accordingly.

Thankfully, the user managed to have his SIM card disabled, albeit this process still took nearly half an hour.

It is possible this incident is leaked to the GateHub situation, albeit that remains unconfirmed at this point.

It is crucial for users to set up other account security solutions not tied to a mobile phone number first and foremost.

The post Reddit User Gets Through a SIM Swapping Attack Without Extensive Losses appeared first on The Merkle Hash. 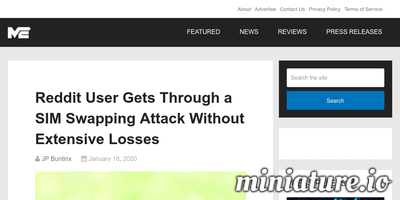