The author of “Rich Dad Poor Dad” Robert Kiyosaki says he has stopped buying gold after respected gold bull Dennis Gartman Withdrew his investment from the shiny rock. According to Robert, Dennis says the price of gold has peaked and there is no more profit to be made from it. Instead, he is now investing in silver and gold as alternative investments.


“Dennis Gartman respected gold bull is out of gold. Thinks gold price has peaked. I agree. Silver still around $25 Oz. $50 next? Everyone can afford. If you have money Bitcoin is moving up. I am out of gold loading on silver and Bitcoin. What are you doing? Got silver and Bitcoin?,” He wrote on Twitter.


Robert has always been an advocate of investment in gold, silver, and Bitcoin. Being a millionaire himself, he has always pushed for investment in solid stores of value and recently started investing in Bitcoin when his friend made a fortune from the digital asset.


His decision to dump gold at this time alongside a major gold bull like Gartman may help to settle the long-standing dispute between gold and Bitcoin bulls on which of the two is more valuable and which will outlive the other.


It has been argued by gold bulls that Bitcoin has no intrinsic value and will go to zero. On the contrary, Bitcoin is currently in a massive bull run and analysts and investors believe a new all-time high in 2020 is no longer far fetched.


This must be calamitous for gold investors and the industry at large and particularly for gold proponents like Peter Schiff who have steadily criticized Bitcoin. After centuries of a booming industry, it seems gold has come to its end as a store of value and Bitcoin could be the next target for people like Gartman.


Meanwhile, Bitcoin has exceeded $11,000 on some exchanges and a new high is expected in the short term. But along with Bitcoin, Robert advises investment in silver as it is much cheaper than Bitcoin at the moment. 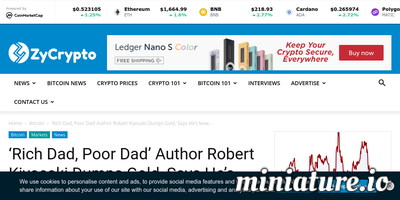