Bitcoin continues trading in a strong uptrend created back in March after the catastrophic Pandemic event that led to the entire global economy to collapse. Bitcoin is currently trading at $9,400 after its 3rd successful halving a few days ago.


Analysts and traders are now speculating about the potential of Bitcoin in the next months and years as the digital asset usually experiences a huge bull rally months after halving events. The last 2 halving events were followed by enormous price surges that lasted months and led Bitcoin to hit ATH.


So far, this halving event seems to be even more successful as it has helped Bitcoin already months before the event.


With interest in Bitcoin growing, the number of predictions about the digital asset is also growing across social media and news channels. We have seen thousands of different predictions throughout the years, everyone wants to correctly predict the next price for Bitcoin although most people fail.


The latest prediction comes from legendary investor Robert Kiyosaki with more than 1 million followers on Twitter.


Kiyosaki believes Bitcoin can easily reach $75,000 in just 3 years while Gold could hit $3,000 in the next year. According to Kiyosaki, these assets are going to get a lot of interest from people and will climb fast due to the incompetence of the Federal Reserve System and because trillions of dollars are being printed every day.


He ends the tweet saying ‘Best-prepare for the WORST’ indicating that the stock market and the global economy could see another big hit in the near future.


Why Do Most Predictions Fail?


It is extremely hard to predict the price of any asset, let alone cryptocurrencies. The variables are simply too high to really predict a specific price by a specific date, however, it’s definitely not impossible to predict whether an asset will go up or down in the future. There are plenty of legendary and multi-billionaire investors that have been doing it for years.


Bitcoin, unfortunately, is a lot more volatile than stocks and can still change drastically in a matter of days. New regulations across the world, perhaps a bug in the code, there are plenty of factors that could come in play and heavily affect the price of Bitcoin. 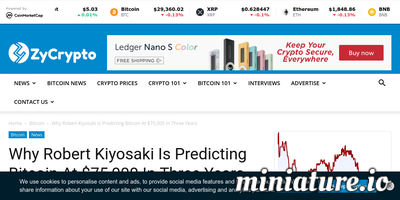 Onecoin: News from the biggest crypto scam so far

How Blockchain Will Revolutionize Healthcare
3