To say that Ripple acquiring a stake in MoneyGram last year excited the XRP army is an understatement. The company now owns 10% of MoneyGram’s common stock after investing a staggering $50 million. MoneyGram, in return, leverages Ripple’s XRP-based payments technology for its international transactions.


Now, the CEO of Ripple — the company behind the XRP cryptocurrency — has recently hinted that the firm is set to ink new acquisitions and deals in the near future.


Speaking in the latest episode of Ripple Drop, Brad Garlinghouse observed that the Coronavirus crisis has wreaked havoc on most sectors of the global economy including cross-border payments. However, he is confident that they will continue to move money across the globe as there is still a large number of migrant workers who have to send money back home.


Despite the pandemic slowing down businesses to some extent, Ripple still has a hoard of $200 million that was raised in a Series C financing round late last year. Garlinghouse noted that the San Francisco-based company is planning to use this capital and other strengths to grow its business and score more deals in the next few months.


“We need to be more prudent about business decisions, but we’ll also probably, because of the strengths we’re coming from, look at how we strategically grow the business and, you know, look at deals, look at investments, and potential acquisitions in the coming months.”


Following these comments, Ripple’s rumor mill is now churning out gossip that the company could be planning to acquire crypto lender Nexo. Others even suggested that Ripple could strike a deal with a large tech company like Google, Facebook, or Amazon.


Ripple has not announced any new acquisition as of yet. Meanwhile, the fintech firm recently launched a non-profit organization that will work towards improving the development and adoption of the decentralized XRP Ledger.


The XRP Ledger Foundation, launched on September 24, looks to improve various areas including governance, changes to the core code, and the validators to boost growth and innovation in the XRP Ledger.


“The people behind the XRP Ledger Foundation are long-time contributors to the XRP Ledger’s development and success. Through the Foundation, they will support and provide resources to others building applications and infrastructure for the community. We and the community have worked over the past 8 years to dramatically increase the decentralization, performance, and feature set of the XRP Ledger and remain committed to its future growth and innovation led by the Foundation.” 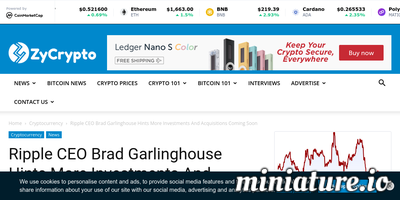 Bitcoin's Richest Are Selling, So Why Is The Price Surging?
2

Why Is PayPal Looking For Crypto Companies To Acquire Just Days After Announcing Support For Bitcoin?