As someone who was there from virtually the start, Roger Ver has seen and done it all in Bitcoin. A tireless evangelist for Bitcoin since long before it was cool, Ver remains a vocal proponent of the benefits of peer-to-peer cash and its power to effect positive change in the world. Every day this week, Roger Ver will be sharing a chapter from his life story in a multi-part video series. Rich in anecdotes, it provides a fascinating insight into how Roger Ver and Bitcoin became inexorably intertwined.

From preaching the gospel of Bitcoin to anyone who would listen to funding early crypto startups, Roger Ver’s support for the industry has known no bounds. Bitcoin’s first angel investor remains an outspoken advocate for Satoshi Nakamoto’s creation, and is perhaps best known today for his support of Bitcoin Cash. An instantly recognizable figure within the cryptocurrency space, Roger Ver’s entrepreneurial spirit shone through from an early age. In the first video in the series, published on September 9, Ver explains how his fifth grade class invented its own fiat currency, named after their teacher Lindy. Lindyland dollars would be used to pay kids for work or other tasks completed. The job that earned the most Lindyland dollars was carrying the food cart from class to the cafeteria, a task which Ver took on despite it meaning he would lose five minutes of recess each day.

“When you’re in the fifth grade, recess is the most important thing in life, but I wanted to earn those Lindyland dollars,” Ver recounts. “A lot of kids didn’t understand the difference, that one Lindyland dollar was not worth one US dollar – the actual exchange rate was 50 to 1.” The Bitcoin.com Chief Executive then confesses the money-making scheme he concocted, an experience which was to instill his first lesson on inflation.

When Roger Ver moved up to junior high, his side-hustles escalated and he found himself selling candy bars to fellow students. “My parents … took me to Costco where you could buy candy bars for 20 cents each,” Ver grins. “I had $20 of my own money, that maybe I found coins in couch cushions or whatever. I spent all of it on candy bars and then sold them at school for like 50 cents each. I was able to earn, I dunno, maybe $20 or $30 a week selling candy bars in junior high school and as a junior high school kid that was a lot of money.”

Bitcoin.com’s Executive Chairman, who served as the company’s CEO for years, remains deeply involved in promoting crypto, and continues to invest in projects building new crypto protocols, applications, networks, middleware, wallets and other tools. He’s also active on the ground, getting out there to meet people at crypto conferences and global events, while striving for real world adoption of cryptocurrency as a medium of exchange and a mechanism for financial inclusion.

Having manifested itself at a precocious age, Roger Ver’s sharp eye for a deal led to him launching his first online venture in 1999 through 2000. At the peak of the dot com crash, Ver was looking for a new hard drive for his PC and discovered that in the clearance sales they were selling 9GB hard drives for around $100. Checking on Ebay he found that the same drives would fetch almost $400 online.

In subsequent episodes of Roger Ver’s video retrospective, the bitcoin entrepreneur picks up where he left off, in a frank interview that reveals how:

At the end of the first episode, Ver sums up his business philosophy succinctly:

What are your thoughts on Roger Ver’s business story? Let us know in the comments section below.

Did you know you can verify any unconfirmed Bitcoin transaction with our Bitcoin Block Explorer tool? Simply complete a Bitcoin address search to view it on the blockchain. Plus, visit our Bitcoin Charts to see what’s happening in the industry. 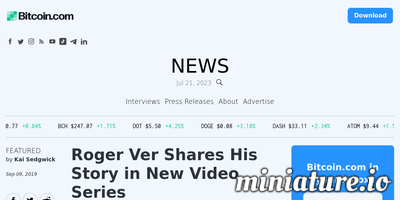 Crypto Winter to Spring: Key Factors That Brought Bitcoin Back to Life