The National Bank of Rwanda (NBR) has become the latest African central bank to join the digital currency movement after an employee confirmed the institution is studying the possibilities of issuing its own digital currency.

According to the employee, John Karamuka, this study will be looking at economic, financial, and technical aspects related to central bank digital currencies (CBDC), as well as “the operationalization model.” The study will also analyze the “implication of the CBDC on monetary policy and financial stability.”

However, in his remarks to The New Times, Karamuka revealed that the study had exposed the limits or lack of global standards and reliable benchmarks on the subject. On the African continent, a few countries, namely Nigeria, Ghana, and Tanzania recently either signalled plans to explore or have made progress on developing CBDCs. Still, only a few countries globally, including small nations like the Bahamas and The Republic of the Marshall Islands, have seen their CBDC projects make real progress.

Meanwhile, Karamuka, who is the director of payment systems at the NBR, explains how his organization has attempted to benchmark its own progress. He said:

Nevertheless, we are benchmarking on countries that are at more advanced stages, learning both positive and negative experiences. We are basing on work done by international institutions such as the International Monetary Fund, World Bank, World Economic Forum among others.

The Necessity of the CBDC

The New Times report also carried the Rwandese crypto and blockchain community leader’s reaction to the revelations. Norbert Haguma, who is the Chairman of the Rwanda Blockchain Association, questions the necessity of a CBDC. He said:

“A CBDC should retain the best attributes of both cash and existing e-wallet solutions: cash can be exchanged offline, without restrictions or fees, while digital payments such as mobile money allow for instant long-distance transfers.”

Additionally, Haguma suggests that financial inclusion and the CBDC’s interoperability should be key factors that must be considered as well. Following Karamuka’s revelations, Rwanda, whose central bank issued a warning against bitcoin trading in 2018, becomes the latest African country to signal its readiness to embrace emerging fintech. The revelations come a few weeks after the Central American nation of El Salvador made bitcoin legal tender.

What are your thoughts on the NBR’s digital currency study revelations? Tell us what you think in the comments section below. 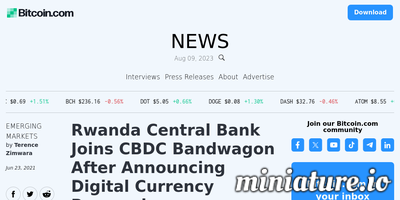 Calls To Ban Crypto Make Headlines, But They Ignore Reality
2