During the course of 2021, crypto assets have increased a great deal in value but alongside this, the fees to transact on these networks have risen as well. Bitcoin (BTC) and Ethereum (ETH) are the two largest blockchains, in terms of market capitalization. The two networks also take the cake when it comes to expensive transactions and this has been a complaint on social media and crypto-focused forums.

Of course, people have been complaining about the fees and the backlog of transactions. “Always remember people,” one person tweeted. “The sky high transaction fees of ethereum [and] bitcoin are there so someone wants to make profit, not because they’re necessary.” Financial reporter, Kyle Torpey tweeted about the fact that it cost more to send wrapped bitcoin (WBTC) using Ethereum, than it does to transfer bitcoin onchain.

Other digital currency fans, specifically ETH supporters believe the high fees problem will be fixed. “On the surface, it looks far overstretched, but 2.0 is going to massively increase ETH’s speed, scalability, and value,” an individual claimed on Twitter. “Those outrageous fees will become a thing of the past.”

Bitcoin cash proponents also discussed the massive fees on both the Ethereum and Bitcoin networks during the course of the past week. The cost to get a transfer into the next block using the BCH network costs $0.0021 according to bitcoinfees.cash statistics. The current median fee on the Bitcoin Cash (BCH) blockchain on February 4, 2021, is $0.0009. Bitcoin.com founder Roger Ver recently appeared with the nomadcapitalist.com founder, Andrew Henderson, and discussed the problem with BTC transaction fees.

The high fees have also seemingly pushed stablecoins who leverage these networks to alternative blockchains. For instance, when onchain fees became too burdensome, the most popular stablecoin tether (USDT) started migrating from BTC (Omni Layer) to the Ethereum chain. Since the ETH network fees have spiked in recent months, recently USDT settlements have seen more action on the Tron blockchain. Additionally, the second most popular stablecoin USDC is migrating to the Stellar network and fees may have spurred this decision as well. 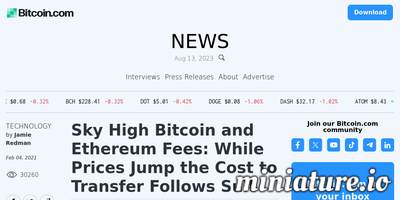 You Can Soon Win Bitcoin by Playing Counter-Strike

Citigroup: Bitcoin Is at a Tipping Point, Could Become Preferred Currency for International Trade