Many people consider the Ripple network to be completely centralized. That is not the case, as dozens of XRP validators are available at any given moment.

Decentralizing a network on the scale of Ripple is no easy feat.

However, some may argue that this network has less centralization compared to others.

There are XRP validators, which act as somewhat of a full network node.

There is always a demand for more validators, but incentivizing people to do so is a different matter altogether.

CoinField wants to add more validators to the network through its own bounty program.

Through the Sologenic venture, the goal is to provide 10 qualified developers of business with the necessary funds to set up a validator on the network.

It is the first time a venture on this scale is funded by the SOLO Community Fund, or SCF.

This fund has one purpose: expanding the Ripple ecosystem by whatever means necessary.

Those who want to apply for the bounty need to confirm they are developers or companies supporting XRP.

Qualifying respondents will receive up to $1,500 in funding to convert server costs for up to six months.

It is a very interesting venture that will benefit both Ripple and XRP alike.

The post Sologenic Wants to add 10 XRP Validators to the Ripple Network Through a Bounty Program appeared first on The Merkle Hash. 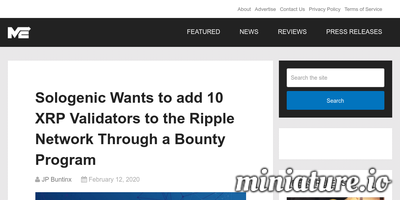