There are multiple metrics and models that are used to predict the bitcoin price in the future. A widely-known — yet often contested — one is the stock-to-flow model designed by quant analyst PlanB.


According to the analyst, bitcoin is due for a massive price appreciation based on a new key update to the original model.


It’s About Time BTC Goes Up


Bitcoin is quickly rebounding after a $400 correction over the weekend. The flagship cryptocurrency is trading at $10,698.26 at press time. Analysts think bitcoin was consolidating before commencing its next parabolic phase.


In a Sept.14 tweet, PlanB posited that it was time for bitcoin to climb significantly higher. The crypto strategist emphasized that this prediction is in reference to a new update to the original stock-to-flow model.


The 2019 version of the S2F model is basically built upon the fact that bitcoin — just like gold — is valuable due to its unforgeable scarcity. The asset’s value increases as the new supply is slashed by half every year. The latest iteration of the model (the stock-to-flow cross-asset model), on the other hand, introduces other assets like gold and silver to the picture as well as several phases in bitcoin’s maturity as an investment asset.


Per the original S2F model, BTC should hit $100K by the end of this year. Responding to a crypto enthusiast who asked where the gigantic amount of money to push BTC to such great heights will come from, PlanB explained that it will be coming from “ silver, gold, countries with negative interest rates [..], countries with predatory governments [..], billionaires and millionaires hedging against quantitative easing (QE), and institutional investors [..].”


BTC Is ‘Perfectly On Track’


Bitcoin has posted a couple of the so-called red dots on the stock to flow chart since the May halving, similar to the performance after the 2012 and 2016 halvings.


The top crypto is currently hovering around the $10.6K level. Some might wonder, is it too late for bitcoin to begin its ascension to $100,000? But according to PlanB, bitcoin remains on track as the historically accurate S2F model shows. 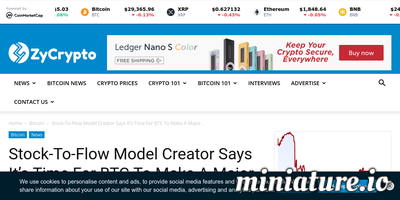 Here's where blockchain technology is set to...