A recently published report from the research and analysis firm Peckshield indicates that during the last two quarters of 2020, cryptocurrency exchanges accepted 147,000 BTC ($1.3 billion) from high-risk addresses.

During the last few years, blockchain research and surveillance firms have been classifying “risk levels” to specific transactions stemming from suspicious addresses and wallets. For instance, certain bitcoin addresses could be on a country’s sanctions list, used on a darknet marketplace, siphoned from an exchange breach, or used in any type of criminal activity.

According to a report from the Chinese crypto analytics company, Peckshield, global exchanges allowed deposits of up to 147,000 BTC ($1.3 billion) from high-risk addresses in the first half of 2020. According to Peckshield it also monitors a number of bitcoin mixing applications and exchanges that allow swaps without know-your-customer (KYC) rules. The report notes that it has monitored roughly $1.59 billion worth of digital assets. The report’s findings also note that the movement of alleged illicit addresses represented a total of 13,927 transactions. Peckshield is one of many blockchain surveillance companies reporting on these types of high-risk addresses.

On May 15, news.Bitcoin.com reported on 20 blockchain surveillance firms that investigate the same types of data Peckshield collects. However, news.Bitcoin.com found some significant inaccuracies when our newsdesk leveraged the Bitrank application.

On that day our newsdesk copied and pasted a tainted address, which was flagged by law enforcement and stems from the Plustoken scam and entered it into the Bitrank application. Unfortunately, Bitrank’s platform gave the address a “Risk Score of 52” or “acceptable,” even though it was used in the Plustoken scam.

This means the accuracy of Peckshield’s data and the many other blockchain analysis firms may not be so accurate. 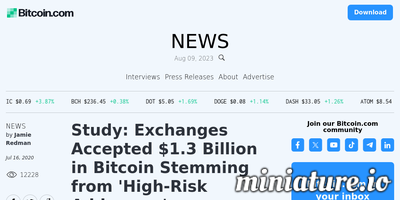 Use of Bitcoin “Mixers” By Darknet Entities...