A new Coingecko survey has found that a large number of yield farmers do not know how to read smart contracts despite claiming they understand the risks that come with such investments.

According to the survey, which polled 1,347 people, around 40% of decentralized finance (defi) users cannot comprehend the smart contracts they use for farming. Some 33%, it says, have never heard of ‘impermanent loss’ – a temporary loss of funds that occurs when providing liquidity.

This “implies that they (farmers) don’t know their real return on investment (ROI) and are extreme risk-takers for the sake of the high returns,” concluded Coingecko, a data aggregator for the crypto industry.

Smart contracts are at the heart of defi protocols. Through them, investors can move their assets across different protocols looking for the best possible return in a process that has become to be known as ‘yield farming’.

Some of the most popular farming pools include compound (COMP), balancer (BAL), yearn.finance (YFI), curve.finance (CRV) and sushiswap (SUSHI). As of September 21, a total of $9 billion of value was locked in the entire defi market, up 300% since July, figures from Defipulse show.

Per the survey, more than half of farmers put up under $1,000 in capital to farm – but the returns have been astounding, as high as 500%. About 93% of respondents said they have earned as much profit from their ‘meager’ investment capital. For Coingecko, this was not unexpected.

The result is not a surprise find as many of the current new pools provide insanely high APY of over 1,000%. Our opinion is that these high yields offered are not sustainable as it comes with high risk, and the spike in gas fees will be a barrier to entry and exit for farmers.

Coingecko observed “a behavior where farmers would ‘farm and dump’ after accumulating a substantial amount of reward tokens in the pool, which indicates that yield farming tokens are not being held long-term.”

Around 68% of users claimed they do not leverage their positions to minimize risk, and 49% said they would not invest in unaudited protocols, instead, relying on auditors to check the safety of the smart contract.

The majority of yield farmers hold ethereum (82.7%), with bitcoin accounting for 74%. Farmers holding chainlink reach around 26% with litecoin, polkadot, and tron each accounting for between 15% and 20%.

What do you think about yield farmers failing to interpret smart contracts? Let us know in the comments section below. 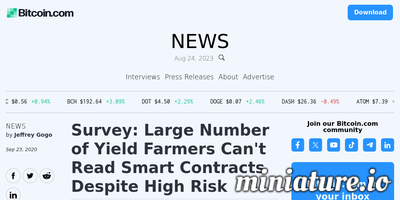