In late September, the Bahamas announced that it would officially launch its central bank digital currency known as the “Sand dollar” this month. According to reports, the country’s central bank is planning to make the CBDC interoperable on a global scale.


After piloting the Sand Dollar in Exuma and Abaco, the Bahamas is set to release its retail central bank digital currency. Yesterday, local news publication Nassau Guardian reported that the country is eyeing October 20 for the possible launch of the Sand Dollar.


The assistant manager of electronic solutions at the CBOB, Bobby Chen, indicated that the digital fiat currency is currently being used on a domestic level but they are working on making it “interoperable with other global currencies”.


Although the Sand Dollar is not a cryptocurrency in the technical sense, it profers some unique characteristics. According to CBOB’s Head of Banking Cleopatra Davis, the digital currency will entail API card-less onboarding. “This became extremely important during the time of COVID-19 because we realized it’s not business as we know it prior to COVID-19. So, mobility and face-to-face may not be as easily accessible,” she elaborated.


In September 2019, the Bahamas was struck by Hurricane Dorian which left a trail of devastation in its wake. The widespread lack of electricity and cell phone network prompted the central bank to build an offline functionality into the Sand Dollar. This component will ensure that users continue to transact even during an unfortunate event where a natural disaster ravages the Caribbean nation again.


Moreover, Davis also pointed to the Sand Dollar’s interoperability with other wallets which will allow the movement of the digital currency to and from citizens’ bank accounts, which would then enable the conversion to fiat.


The Sand Dollar will be the world’s first central bank-backed digital currency to go live when it launches next week. 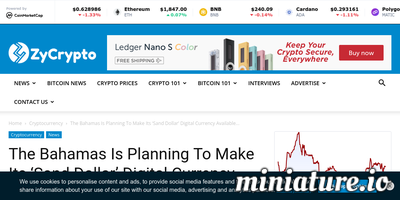 A Short History of Decentralized Exchanges And...

Pfizer Makes Progress with Over 42,000 Enrollment for Its Covid-19 Last Stage Vaccine Trial
3