Following the recent block reward halving, many people expected the Bitcoin network hashrate to drop off significantly. That has not happened as of yet, although some changes can be noted when looking at rankings of the mining pools.

Statistics provided by BTC.com confirm that the Bitcoin mining landscape has undergone some changes in the past year.

Several pools keep vying for traction, yet it can be an uphill battle more often than not.

There are also a few new pools trying to make an impact, which is well worth keeping an eye on.

Antpool has seen minor growth, although some of that has been negated since the block reward halving.

BTC.com itself is doing quite well, although it too has lost some of the gained momentum in the past three months.

The biggest “contraction” comes in the form of “other” mining pools and solo miners, which have seemingly pointed their mining power somewhere else.

What is rather interesting is how a few new pools have come to forefront in the past year.

More specifically, OKExPool – which virtually disappeared for several months in 2019 – as well as 58COIN & THash, and Lubian.com are all trying to climb the rankings.

The post The Current State of top Bitcoin Mining Pools Following the 2020 Halving appeared first on The Merkle News. 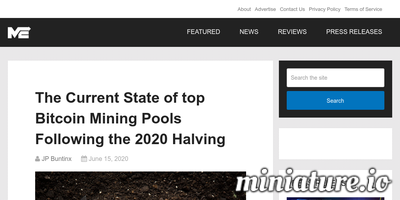