Accidental loss and theft of laptops, mobile devices, and more serve the biggest physical threats to your data. 25% of laptops are stolen from the office or a car, 14% are lost in airports or on planes, but only 25% total are recovered. Although the chip card provides more security, financial security is still at risk of data theft. On average, the numbers from one stolen credit or debit card number sells for $5 on the dark web. Providing the accompanying bank routing and account numbers triple’s the sale value. Here’s how everything works.

To obtain stolen data, scammers use the skimming and shimming methods – collecting payment card data to create a spoofed card.

Skimmers are scammers who use a device to attach over the debit or credit card reader on a gas pump or ATM. This way, the magstripe data is copied each time a customer slides their card for gas or money.

Up to speed with more modern technology, shimmers are scammers who slip a thin device inside the card reader slot of any fitting machine to collect a customer’s chip data. Although they can only copy limited data, the same information is obtained as magstripe skimmers collect.

From 2015-2018, merchants who switched to chip readers experienced 76% less fraudulent and counterfeit payments. Saying this, there are ways to protect yourself from being skimmed and shimmed.

Keep an eye peeled for any red flags. Furthermore, choose the ATMs you interact with wisely- preferably an indoor ATM, or one on a busy street. Keep in mind that scammers don’t only use devices to collect information, that surveillance plays a major role in data theft as well. Knowing this, hide your PIN by covering your hand to avoid a hidden camera stealing your number.

In 2017, nearly 1 in 5 data security incidents involved device theft or loss. There are many more data theft prevention tips such as those previously mentioned, which can be found below.

The post The Data Theft Economy appeared first on The Merkle Hash. 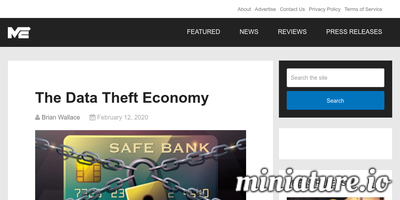