The SEC Shuts Down Another Multi-Million Crypto Scam

The cryptocurrency industry has seen its fair share of shady projects and outright scams. As the SEC continues to crack down on these fraudulent ventures, more and more people are being identified.


Following the efforts by the SEC, two brothers in Pennsylvania have been ordered to cease their investment fund.


Another Scam Gets Busted by the SEC


A temporary restraining order and asset freeze has been filed against the Hvzdzak brothers.


According to the SEC, these individuals stole millions of dollars from multiple investors.


Through their investment fund, it is claimed that users will be exposed to high-growth crypto assets.


Money for this fund was raised through a multitude of different companies, all of which have been slapped with injunctions.


Of the money raised roughly $26 million has been moved to personal accounts.


Some of the investors’ money has been converted to fiat currency through the Gemini exchange.


Other exchanges outside the US have also been mentioned, albeit without going into further specifics.


For the time being, the investigation remains ongoing.


More information is expected to come to light over the coming weeks.


It is not the first, nor the last time that a potential crypto scam falls apart due to intervention by the SEC. 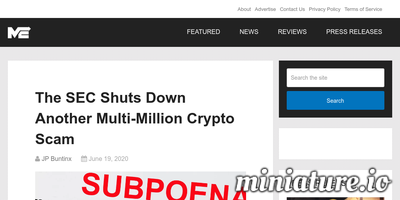