A lot has changed during the last month, as the popular decentralized finance (defi) ecosystem has swelled considerably in value. Since the first week of August, the total value locked in defi jumped over 85% in 27 days from $4.2 billion to $7.88 billion on August 30.

The total value locked (TVL) in the decentralized finance (defi) economy is nearing $8 billion in value, as crypto funds have poured into the surrounding infrastructure. Statistics from the website defipulse.com show that the current TVL on Sunday, August 30, 2020, is $7.8 billion. The defi lending platform Aave makes up 21.86% of that value.

Aave just recently jumped to the number one position as far as dominance is concerned. When news.Bitcoin.com reported on the defi economy crossing $4 billion, Maker captured 31.9% of the dominance on August 3.

Another defi project that has been making waves is the Yearn Finance protocol and the native token YFI.

Yearn Finance essentially lets users leverage a variety of defi applications like Curve, Aave, and Compound in order to maximize yield or lending schemes. Basically, yield farmers strategically utilize a number of liquidity pools, as Yearn gives the best returns on all the liquidity within the ecosystem.

The project’s token YFI has amassed great value recently and on Saturday evening, the YFI token topped a high of $39,189 per coin. On Sunday, YFI is hovering just above the $30k mark as the price dipped to $27k a touch after midnight (ET).

The last 30 day’s dex trade volume has increased by 142% and Uniswap is the most dominant decentralized exchange. The dex Uniswap captures 60% of the global dex trade volume which is followed by Curve (18.1%), and Balancer (8.9%) respectively.

Defi users over the last month have increased by 32% since August 1 from 293,475 users to 388,011 users recorded on August 29. Dune Analytics data considers each user as a unique address among the myriad of defi applications.

What do you think about the phenomenal growth defi has seen during the last 30 days? Let us know what you think in the comments below. 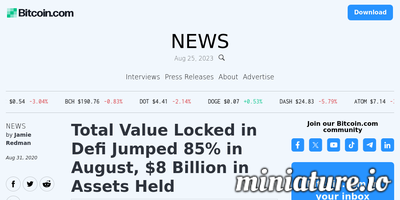