The better part of this week has been mainly bullish with the price of bitcoin zooming past $16,000. But despite the positive sentiment, billionaire hedge fund manager Ray Dalio doubled down on his skepticism towards the king of cryptos. During a recent interview, Dalio indicated that the coin’s price surging higher would only force governments to “outlaw” it.


This year has seen hedge fund legends like Paul Tudor Jones and Stan Druckenmiller jumping on the bitcoin bandwagon and endorsing the cryptocurrency as a dependable store of value. Yet, Ray Dalio, the founder of investment firm Bridgewater Associates, maintains his anti-crypto stance.


During the World Economic Forum in Davos, Switzerland earlier this year, the billionaire investing guru claimed “cash is trash” while advising investors to buy gold. His warning? Investors should keep off bitcoin as it is not effective as either a medium of exchange or a store of wealth.


As expected, the crypto community came out guns blazing in response to Dalio’s remarks. DeFi developer Julien Bouteloup, for instance, postulated that the Wall Street tycoon was “doing his best to FUD $BTC so he can buy the dip & long Gold.”


The CEO of Twitter, Jack Dorsey has also chimed in with his own opinion. Dorsey responded to an article by leading industry publication CoinDesk that asked whether Dalio was right about authorities killing bitcoin with a resounding “No”.


Notably, Ray Dalio and Twitter’s Jack Dorsey are on opposite sides of the bitcoin spectrum. Unlike Dalio who uses every chance he gets to bad-mouth the top cryptocurrency, Dorsey is an ardent supporter of bitcoin. The Twitter chief has constantly said that bitcoin is probably the best native currency of the internet.


Jack Dorsey is also the CEO of fintech giant Square that recently purchased 4,709 bitcoins (worth $50 million at the time) which represented 1% of the firm’s total assets. The announcement on October 8 stated:


“Square believes that cryptocurrency is an instrument of economic empowerment and provides a way for the world to participate in a global monetary system, which aligns with the company’s purpose.”


Despite the 50% crash that bitcoin saw in March, the cryptocurrency has recovered completely and heavily outperformed other asset classes. Bitcoin has gained over 110% on a year-to-date basis while gold is up only 24%. 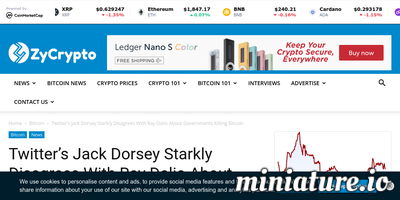 Why Joe Biden Could Be Big For Bitcoin

EOS Is in a Sideways Move, May Slide Below...