Veteran Trader Warns Investors Against Putting Their Faith In Ripple’s XRP. Here’s Why

XRP, the cryptocurrency promoted by San Francisco-based blockchain payments firm Ripple has attracted fans and critics in equal measure. The coin has severely underperformed the entire crypto market, leaving its holders in a lurch over the past couple of years.


Its poor performance in recent weeks has even led to the digital asset surrendering its place as the world’s third-largest crypto to Tether (USDT) stablecoin. While XRP investors are confident in the future price of the coin due to its blossoming utility in cross-border payments, a well-regarded veteran commodity trader believes there is no end in sight to this downtrend. As a result, he is cautioning investors against the cryptocurrency.


‘Don’t Put Your Faith In XRP’


Peter Brandt, a trader who has more than 40 years of experience in the commodity trading business, took to Twitter on June 19 to offer financial advice to Millennials and Generation Xers. Brandt posited that this is the same advice he gives to his family members.


This is not the first time the classical chartist is taking aim at XRP. He has in the past suggested that XRP is highly manipulated by Ripple since the firm owns a massive portion of the total supply. This month, Brandt took a look at XRP’s chart and noted that the coin is likely to drop by as much as 30% to 0.0000145 before finding any solid support.


Sadly, Brandt is not the first analyst to blame Ripple for XRP’s lackluster performance. Late last year, Multicoin Capital’s Kyle Samani observed that the sales of XRP in previous quarters are exerting bearish pressure on XRP. Speaking to Bloomberg at the time, Samani had said:


“The company has been steadily increasing their sales of XRP over the previous three quarters, likely inflicting downward price pressure on XRP. Savvy investors have known this for some time; however, for whatever reason, the market is just now picking up the narrative and reacting.”


Invest 10% Of Net Worth In Bitcoin: Brandt


While Brandt is openly against making investments in Ripple’s XRP, he is overtly bullish on the flagship cryptocurrency. He advised the younger generations to put at least 10 percent of what they can afford in BTC. Notably, he has previously quipped that bitcoin is likely on the verge of a new parabolic phase that will launch it to the $100,000 region in no time.


Moreover, Brandt is also long-term bullish on tech stocks and the housing market. To quote him directly:


“I will give you the same advice I give my X Gen children and M Gen nephews and nieces.


Buy a home — any home, but get into the housing market. Work two jobs if you need to. Invest 10% of what you can afford in BTC. Invest monthly in quality tech and value stock ETFs.”


As usual, the cryptocurrency market is oozing with unpredictability. Whether XRP is poised to careen lower in the near future as Brandt predicts is anyone’s guess. What remains clear, however, is the fact that XRP bagholders have experienced nothing but pain since January 2018. 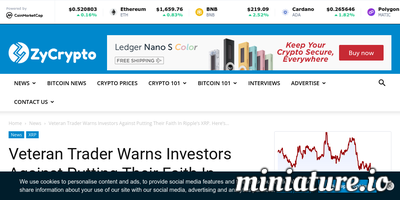 The Hard Truth About Trading — Can the Average...