After a spate of big names parting ways with the Libra Association late last year such as Paypal, Visa, Mastercard, and Ebay, British telecommunications giant Vodafone has become the latest to bid the ambitious digital asset project farewell. While Vodafone’s statement notes it does not rule out the possibility of working with Libra in the future, a statement issued Tuesday by the Libra Association confirms the exit.

The Libra Association‘s membership continues to shrink as British telecommunications conglomerate Vodafone has become the latest to announce a split from the group. The Libra Association describes its role as working “to evolve and scale the network and reserve” of the planned Libra cryptocurrency.

Despite publication of a signed charter in October last year, with Vodafone representation signing on, the group confirmed their departure Tuesday and noted in a statement: “We will continue to monitor the development of the Libra Association and do not rule out the possibility of future co-operation.” The association, which began with 28 founding members, is now down to 20 as Booking Holdings, Ebay, Mastercard, Mercado Pago, Paypal, Stripe, Visa and Vodafone have all exited. Vodafone is making the move to direct resources and attention to M-pesa, its own digital payments service. Some speculate Libra’s ongoing confrontations with government regulators and financial policymakers could also be an influencing factor in the decision.

Dante Disparte, the Libra Association’s head of policy and communication said in a statement issued to multiple media outlets:

Though the planned 2020 launch of the libra crypto is doubted by some — thanks in part to lack of specific mention in Facebook CEO Mark Zuckerberg’s recent “vision for the decade” social media post — the Libra Association pushes on. Libra also does not appear to be lacking interest from companies hoping to participate, with reports of a wait list of over 1,500 companies and plans to admit new members in 2020.

The Libra project has been targeted from the outset by politicians and lawmakers, and even made fun of by influencers in the crypto space for not being a true crypto in the sense of decentralization and limited supply. Still, the saga stretches on into a brand new decade while the crypto community watches to see what unfolds.

What are your thoughts on Vodafone exiting the Libra Association? Let us know in the comments section below. 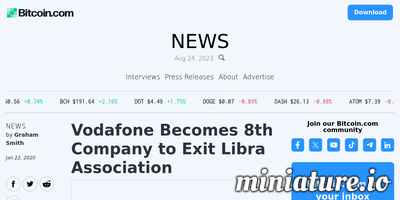