Home /
Blockchain Technology /
What is a Blockchain Operating System? A Deep Dive Guide

What is a Blockchain Operating System? A Deep Dive Guide

A traditional operating system (OS) is just a huge program underlying everything else. It’s the link between the hardware and software, as every application you use, whether it’s Google Chrome or Minesweeper, needs access to the hardware’s resources.

Instead of having to program on the hardware directly, an operating system lets you program on that system, which provides everything you need from physical resources like memory and processing, to the mouse and keyboard.

We still had computers before operating systems were invented, and these 1940s machines were programmed in machine language. Operating systems came out in the 1950s with GMOS, and Windows was first introduced decades later, in 1985, which looked like this: 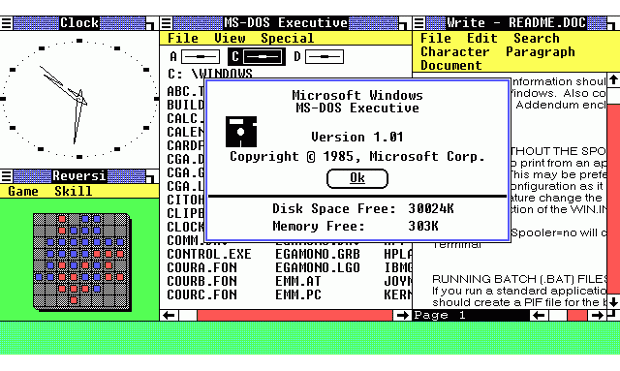 Today, there are well over a billion personal computers around the world, not to mention the nearly four billion smartphones, significantly outpacing even the number of vehicles in the world.

Clearly, operating systems have become one of the most successful technologies of all time. This historical background is important, because it shows that even an indisputably revolutionary technology can take decades to become a global phenomenon. Blockchain and blockchain operating systems are no different, so claiming “failure” before they’ve had time to reach maturity holds no water.

Put differently, a blockchain OS captures a user’s commands, but executes these on the blockchain. If you’ve ever programmed on the blockchain, for instance to make a DApp, or decentralized application, you’ll be familiar with the horrid development experience compared to making traditional applications.

While the normal operating system space brewed for decades before taking off, we’ve seen blockchain operating systems emerge for the mobile space to the personal computing space to global commerce and finance, all in just the last couple years.

As this Blockchain graph of the number of blockchain wallet users shows, growth started slow but exploded in just a handful of years: 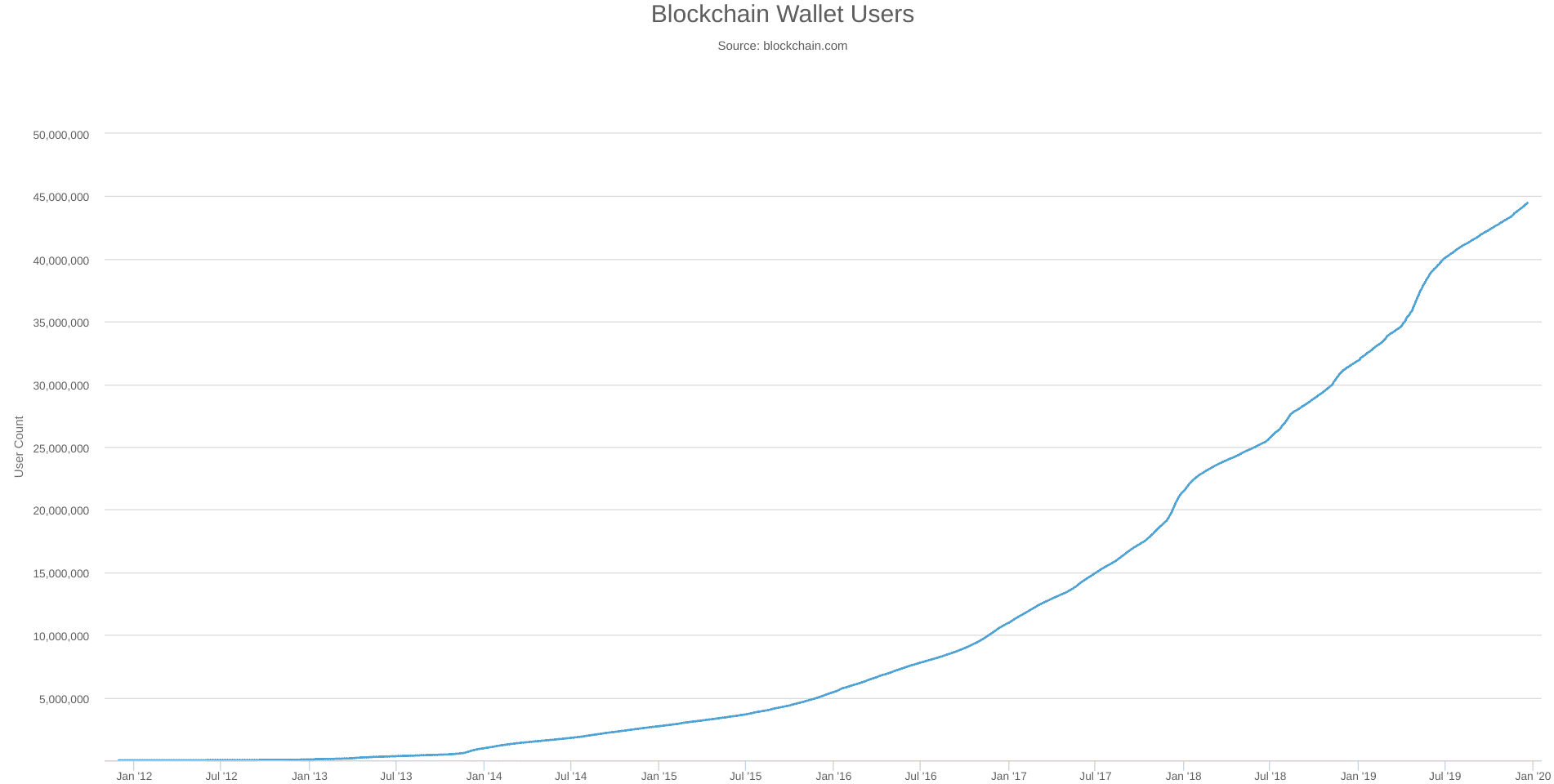 Interestingly, there were practically no wallet users until around 2013, a full four years after the launch of the Bitcoin network in early 2009.

If we consider that non-mobile blockchain operating systems really came out in the past year, then the blockchain OS market is extremely early on.

The story looks similar if we look at the number of unique Ethereum addresses over time: 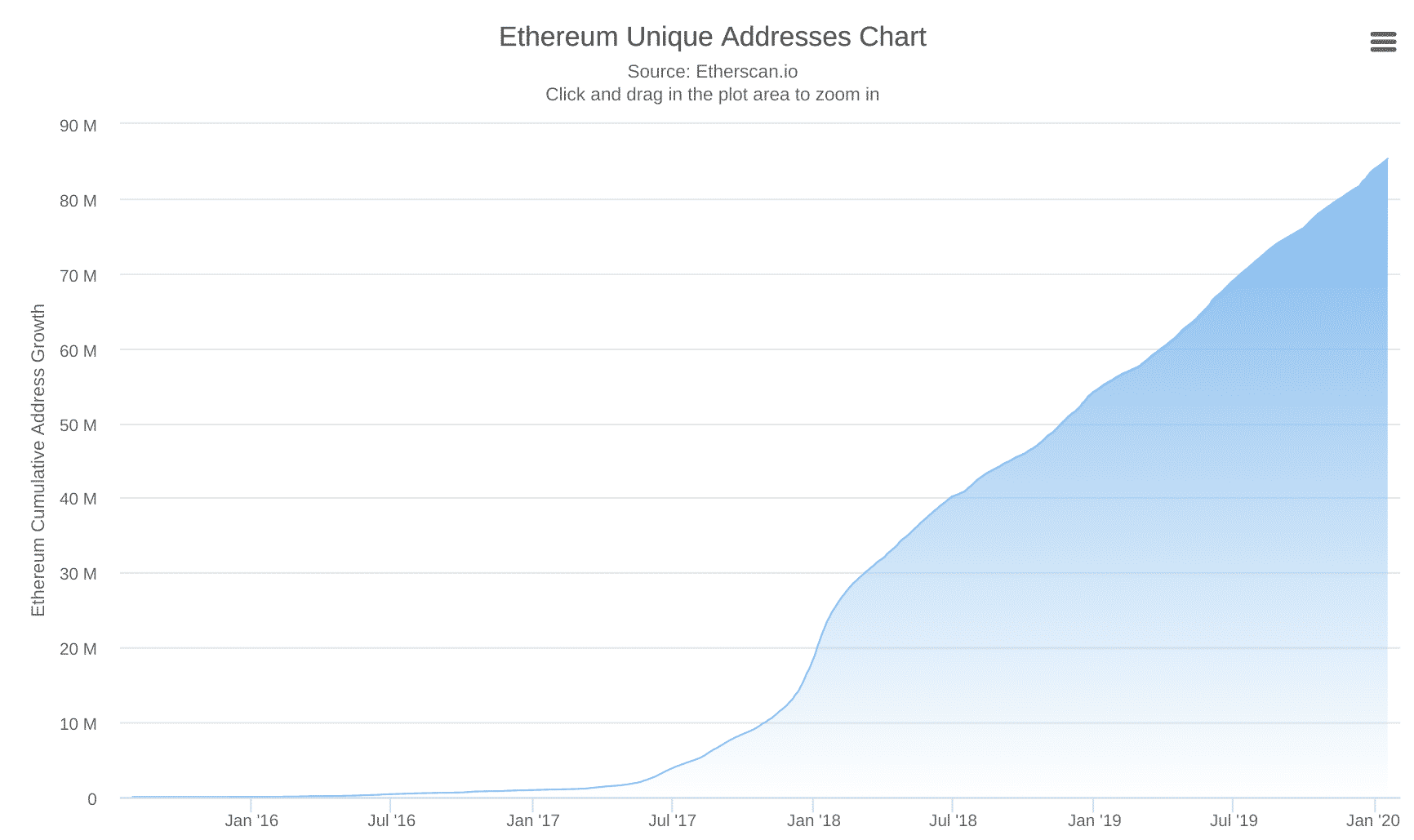 We can see far more rapid growth than in Bitcoin, since by this point, people already had almost a decade to become familiar with the idea of blockchain. Still, Ethereum was launched in 2015, and it took until 2017 for a serious explosion in usage.

Given the nascency of the blockchain OS market, we don’t have enough data to reliably forecast adoption, but if other blockchain adoption charts are anything to go by, then we can expect blockchain operating systems to be widely adopted before 2030.

As we’ve discussed, the operating system market took a long time to take off, and the early versions were extremely primitive. Keeping that in mind, let’s take a look at some current blockchain operating systems.

ConsenSys Codefi describes itself as a blockchain OS for global commerce and finance. As of writing this article, it was introduced just four months ago.

ConsenSys has a long history in the space, as it was founded by Ethereum co-founder Joseph Lubin in 2014. Their LinkedIn company page lists almost 800 employees, easily making it a market-leading blockchain solutions company. Further, they’re seeking a billion-dollar valuation.

All this is to say: When ConsenSys makes a move, it’s wise to pay attention.

Codefi is a product suite with “modular capability to digitize financial instruments.” Basically, it’s focused on being an easy-to-use tokenization system for finance, including payment systems, data analytics, and more. 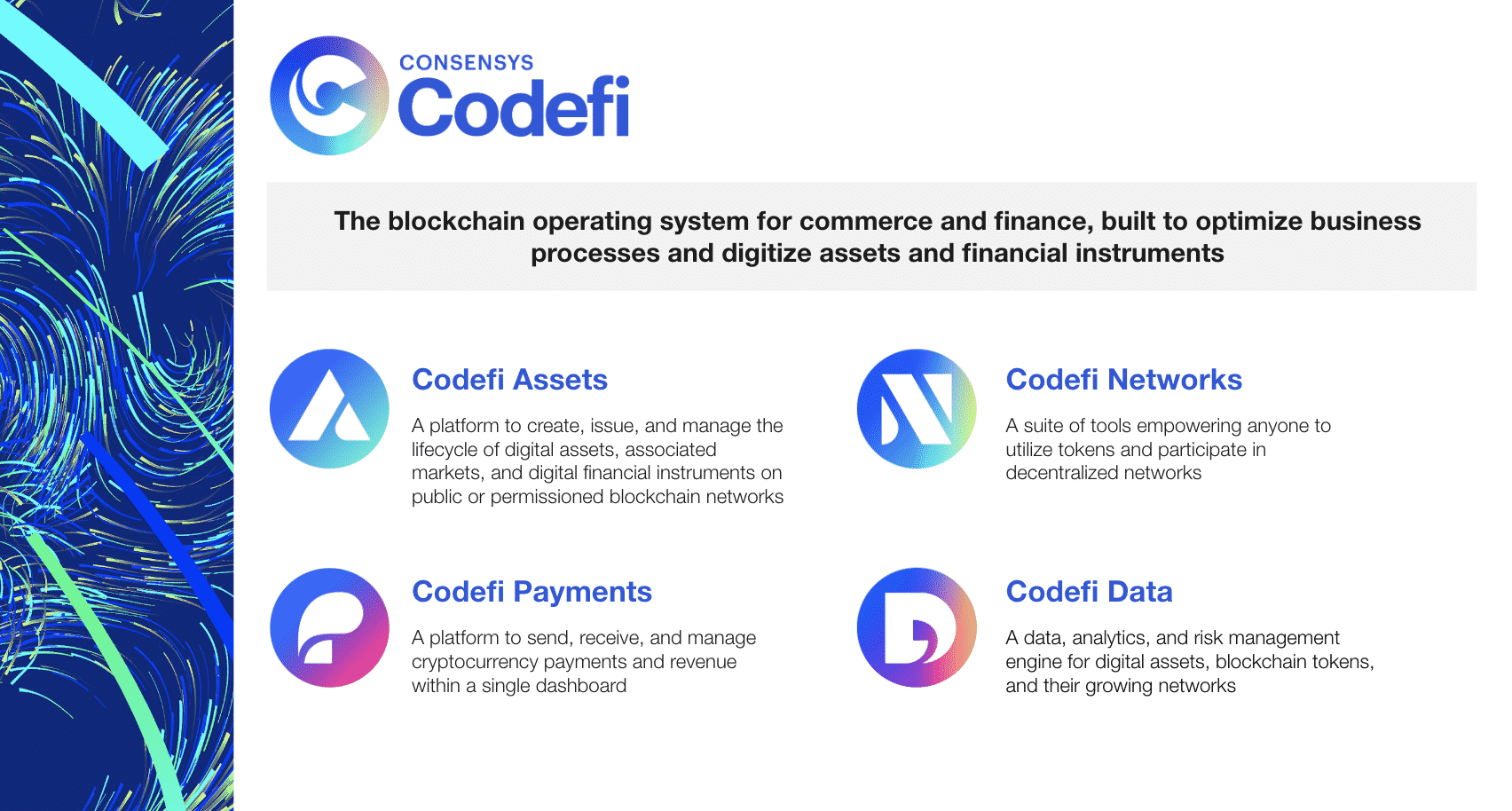 Unlike some of the other blockchain operating systems in this list, Codefi is live on the market, with several case studies to show for it, spanning from real estate to crypto subscription payments for enterprise.

Given ConsenSys’ powerful standing in the industry, and its heavyweight clients like the World Bank and Santander, Codefi is worth paying attention to as a potential Windows for blockchain.

The earliest record of a blockchain operating system I can find is a 3-year-old Steemit article on EOS, “the Epic (blockchain) Operating System.” Yes, that EOS, the one that raised $4 billion without a live product (that’s greater than the GDP of many countries!).

The article claims that EOS provides everything from databases to account permissions to scheduling, and more. As with any blockchain OS, it intends to link the decentralized computer (blockchain) with applications. 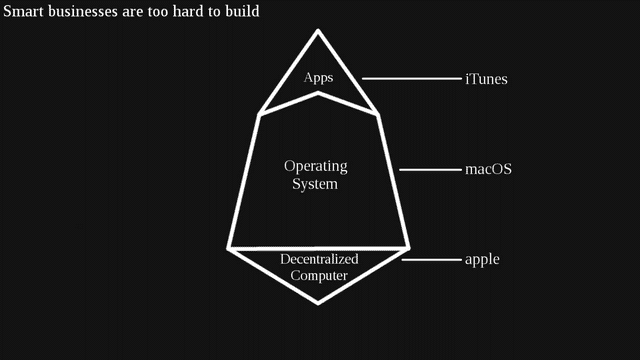 While the article is a bit meaty (and sales-y), this graphic summarizes nicely what EOS wants to provide: 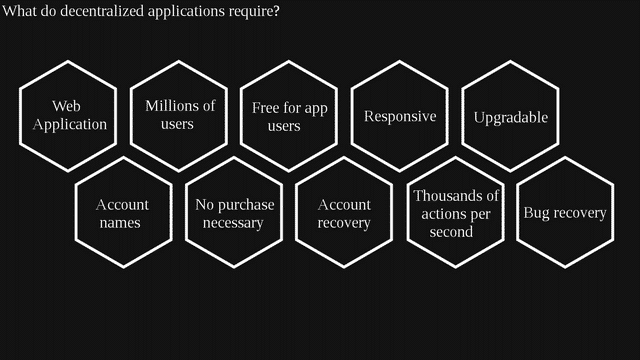 Unfortunately, EOS is plagued with a myriad of issues, from over-centralization to low performance. Lacking the same level of case studies as operating systems like ConsenSys Codefi, despite a $4 billion ICO, EOS seems unlikely to make a turn for the better.

In this list, LibertyOS is probably the closest to an “operating system” in the way most of us think of it. While claiming to be “the world’s first blockchain operating system” (you’ll hear that again), their landing page is asking for investments, not operating system downloads. That’s because they haven’t launched their production-ready version yet, though there is a beta available.

LibertyOS is reminiscent of Ubuntu, as it’s minimalist, with a focus on privacy and security. It even comes with TOR browser, and LibertyOS doesn’t track user behavior, so it feels a lot like a crypto-flavoured Linux.

The “blockchain” part of its OS comes in mainly with the LIB Token, its native currency, which advertisers can buy to get ad-space and users can earn by viewing those ads. Through this, LibertyOS intends to be a financially self-sufficient system, with the OS being free to download.

It claims to be highly lightweight, and its minimum system requirements reflect that, which includes 1 GB of RAM and a Pentium 4 1.6GHz CPU (these came out in the year 2000).

Given that blockchain is by no means an efficient system, this begs the question: How did they make the OS supposedly so performant? According to their white paper, it comes down to a few things. First off, it’s a simpler OS than something like Windows, as they believe their users will be more reliant on the web, rather than needing a full, all-encompassing desktop environment.

This is similar to the approach taken by Google’s Chrome OS, which is used on lower-powered, but highly snappy Chromebooks.

Secondly, they claim to be far more efficient in thread scheduling, going so far as to say it “is three generations ahead of Windows 10 in thread scheduling algorithms and processes.” While this would be difficult to verify, LibertyOS of course isn’t hampered by Microsoft system background processes (which are quite heavy).

However, the latter is true for any other blockchain OS as well. Basically, the cause of LibertyOS’ greater speed can be summarized in one word: Simplicity.

Overledger purports itself to be “the world’s first blockchain operating system.” It focuses on interconnecting blockchains, though this isn’t really what the definition of “operating system” is. After all, traditional operating systems aren’t meant to connect Linux, macOS, and Windows. They’re functional and valuable as their own system.

Interestingly enough, their introductory Medium article explains how operating systems provide “interoperability between the Hardware devices and Software,” but then they go on to say that the Overledger “blockchain OS” integrates all the different blockchains. 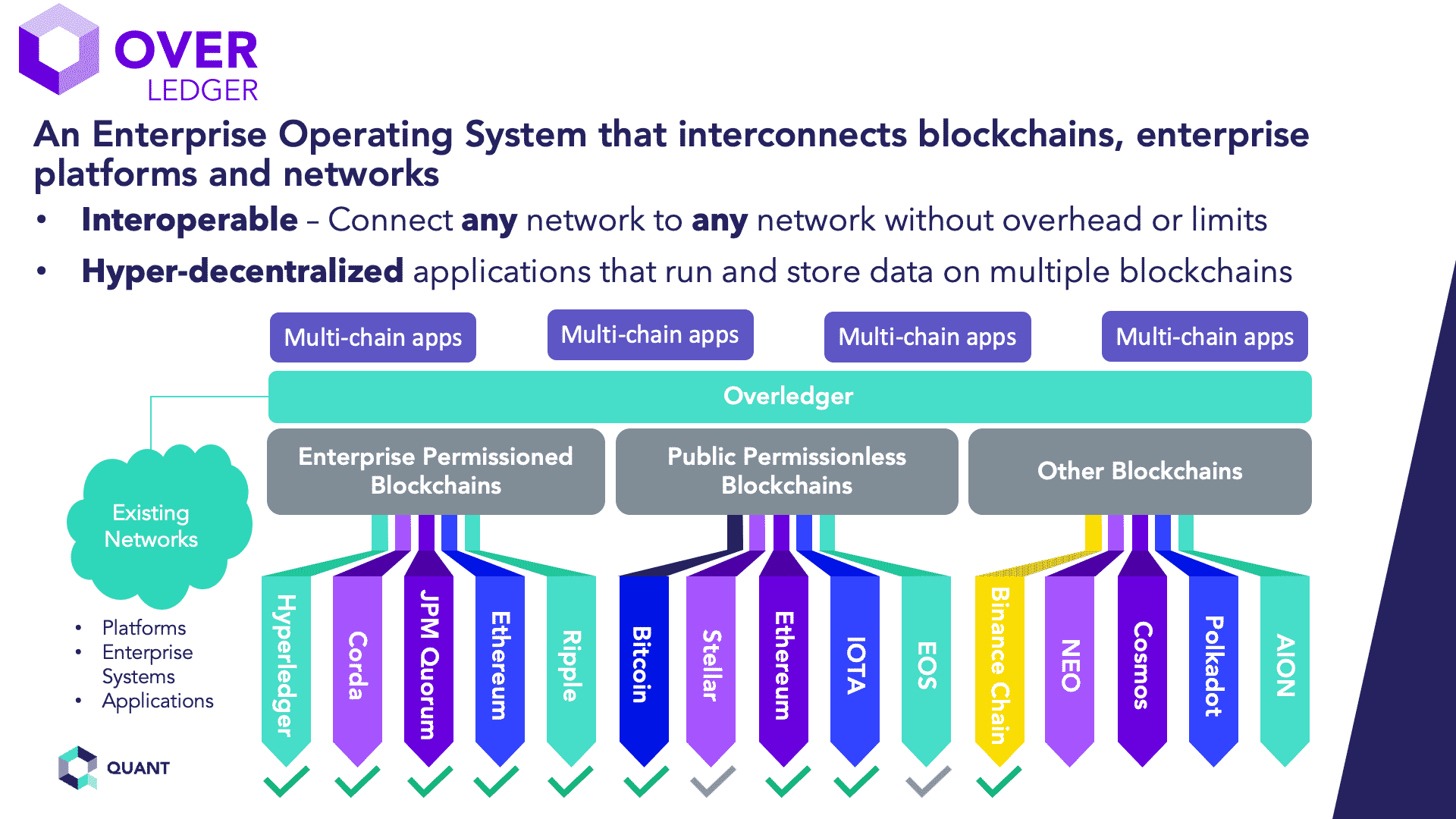 Overledger gets a mention, but it doesn’t seem to have a legitimate chance in the war of blockchain operating systems.

Its main benefit is said to be its high TPS and throughput. The site also describes the TRON Wallet and TRON mainnet, both indicators that TRON is a blockchain, not a blockchain OS.

Yes, you heard that right, this blockchain OS is called “aelf” (all lower-case), which intends to provide “an operating system similar to Linux.” While unclear what exactly they do (the landing page describes it as a “decentralized cloud computing blockchain network”), they’ve still listed on a number of exchanges.

GemOS is meant to be an enterprise blockchain OS, focused on boosting the “collective intelligence,” or “Data IQ,” of previously siloed data. Similar to aelf, it’s uncertain what exactly they provide and what the progress is, but they get a mention because the space is just so new.

As of early 2020, the blockchain operating system space is still in its nascency. While EOS was announced almost three years ago as a “blockchain OS,” with many more following suit, it wasn’t until ConsenSys Codefi’s release just a few months ago that the space seemed to be getting anywhere.

This goes to show that the rate of technological adoption is always increasing, and this is especially true in the blockchain space, which is said to be going faster than even IoT and AI. It’s likely that, as we witness the growth of the blockchain OS, it will incorporate such complementary technologies, from IoT to AI to decentralized self-sovereign identity, as predicted by Gartner.

In the end, we’re sure to see many exciting blockchain OS developments in the near future. Hopefully, one day we’ll be comparing Windows, macOS, Linux, and a blockchain OS side-by-side. The last contender is yet to be determined.

The post What is a Blockchain Operating System? A Deep Dive Guide appeared first on Blockgeeks. 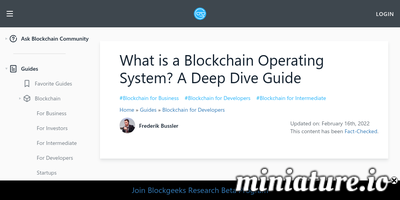 The Altcoin Season Index is a Thing