What Is COMP? A Deep Dive Into Ethereum DeFi’s Latest Trend

Earlier this year, the Ethereum-based Compound finally followed in the footsteps of other decentralized finance protocols, releasing a governance token: COMP. A release on the launch published on February 26th read:

“COMP empowers community governance — it isn’t a fundraising device or investment opportunity. Until the decentralization process is complete, COMP will not be available to the public.”

As the above message indicates, the cryptocurrency was private at its launch: the token was held by venture capital funds, large players in the DeFi space, and the operators of the protocol Compound Labs. But on June 15th, the institutional holders of COMP — names like PolyChain Capital, Dharma, Argent, Dragonfly Capital, and others — unanimously agreed to make the cryptocurrency public.

Since the launch, COMP has seen rapid growth. The asset’s market capitalization is now $740 million, higher than that of Maker (MKR), the governance token of DeFi’s poster child MakerDAO. Yet few in the industry know exactly what COMP does and how one can obtain it.

Simply put, COMP is a governance token that allows one to influence how the underlying Compound protocol operates. As Compound Labs explains:

“We’re proud to introduce a governance system […] allowing you to suggest, debate, and implement changes to Compound — without relying on, or requiring, our team whatsoever.”

This is a shift from the system previously in place, which saw the Compound Labs company largely choose in what direction they wanted to take the protocol. That’s not to say that this was the wrong approach — Compound Labs managed to build a user base of thousands and an economic machine with hundreds of millions of dollars.

The introduction of COMP, though, further decentralizes one of the biggest players in DeFi by allowing a smart contract controlled by users to change Compound. That’s a necessary step to take if decentralization is to be upheld.

COMP is a “standard” ERC-20 asset with special properties.

One can delegate their voting rights to an Ethereum address of their choice — whether that’s a DeFi startup, venture capital fund, or prominent user in the cryptocurrency space. Like democracies, the idea is that users are given an option to delegate a candidate that they believe represents their views the best.

(Importantly, delegating your COMP to an address does not mean transferring them those coins. Delegating allows one to retain custodianship over their own coins while still promoting their views on the direction of the protocol.)

Addresses that have received delegations representing more than 1% of COMP’s supply can propose governance actions This minimum prevents addresses with little economic stake in the network from proposing irrational or dangerous actions.

Governance actions are not suggestions but are pieces of executable code that are integrated into Compound once it gets a majority. 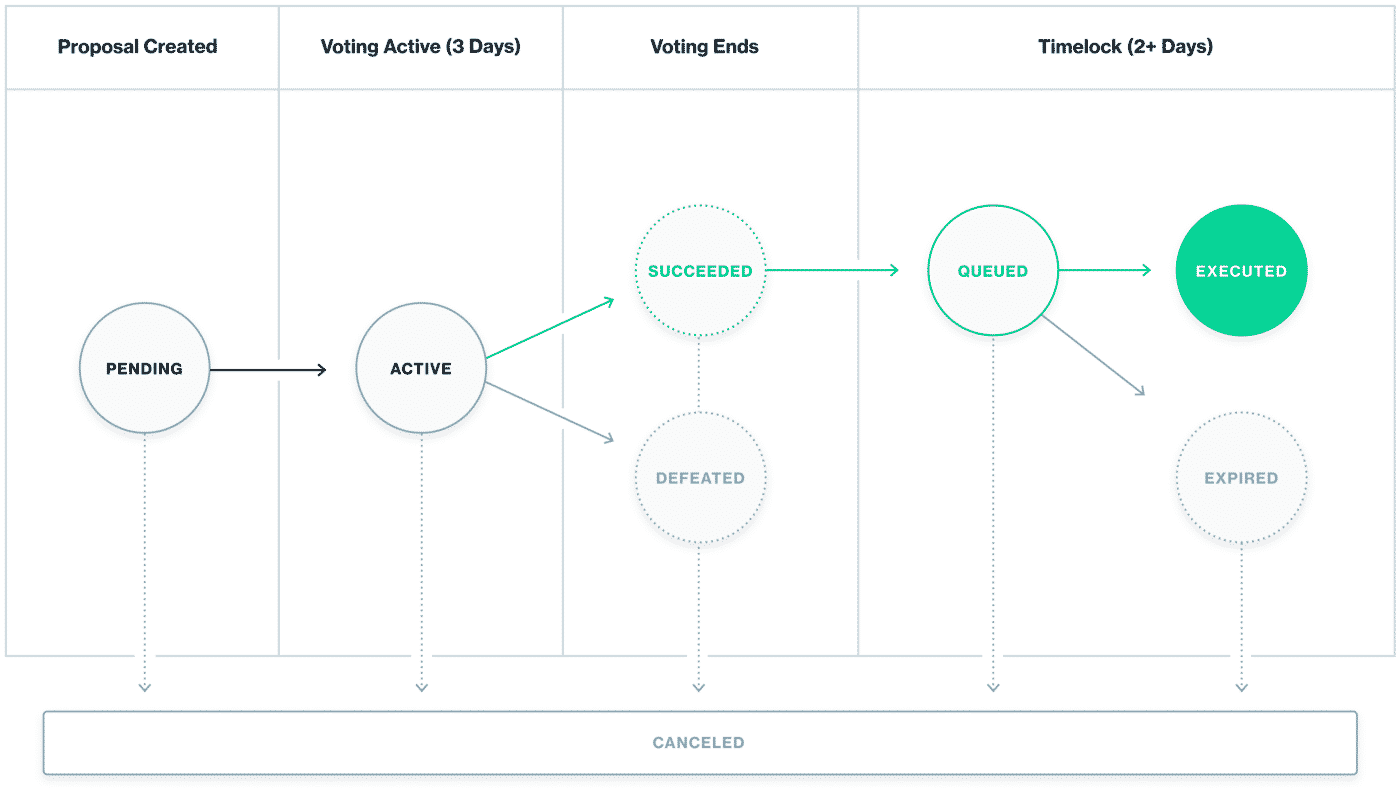 After their initial proposal, actions are then voted on by COMP holders over a three-day period. If the proposal receives at least 400,000 votes (of the total of 10 million potential votes there will be after all COMP is distributed) and a majority of those votes are “for” it, the action is queued in a two-day timelock, then is activated.

The timelock allows users of the protocol to get ready for that change, as

Notably, the governance model itself can be changed. But that would require an entity to propose and pass a governance action changing said model.

That raises the pressing question, what governance actions can one propose? Anything really—as long as it can be coded.

Compound lists adding support for a cryptocurrency, changing how a market’s interest rate is calculator, and changing an asset’s collateral factor as three leading actions that can be completed.

Here’s a list of some of the things that have been proposed and voted on already:

All of the nine proposals have passed almost unanimously thus far, suggesting the existence of harmony between COMP’s biggest holders.

Then again, eventually, not everything will get passed — especially if an action favors the majority of voting power in a negative manner.

COMP does not have much utility asides from what is laid out above. Though there have been discussions of allowing COMP holders to benefit from market activity on Compound (i.e. dividends), yet this is currently a nascent idea, especially when a majority of the Ethereum token has yet to have been distributed.

How Can You Get the ethereum Token?

For retail users of DeFi, COMP can currently be obtained in one of two ways:

Firstly, by exchanging other cryptocurrencies for it. Like most other public digital assets, one can buy COMP by exchanging a “reserve asset” in the crypto space.

As of the time of this article’s writing, COMP can be traded for ETH on Uniswap and other decentralized exchanges. Along with a futures market focused on traders, FTX supports the purchase and sale of COMP with U.S. dollars and Tether’s USDT stablecoin. There are many other exchanges supporting the cryptocurrency, listed at this link, and more platforms are adding the asset every week.

As it stands, anybody using or borrowing cryptocurrency from Compound’s ETH, DAI, USDC, USDT, BAT, REP, WBTC and ZRX markets will be able to claim a certain amount of COMP, totaling to 2,880/day.

COMP is distributed equally between suppliers (lenders) and borrowers.

This method of distribution isn’t perfect though. The Compound Labs team is looking into four solutions to normalize the distribution of COMP, which are as follows:


In four years, the distribution scheme is expected to end, as COMP will then have been mostly decentralized.

Other more uncommon/relatively-inaccessible ways to earn the cryptocurrency include joining the Compound team and/or becoming a shareholder of Compound Labs. There also may eventually be a small amount of COMP distributed to participants of the governance process.

The reason why COMP is so popular right now is because of what is known as “yield farming.”

In allowing the issuance of 2,880 units of a relatively expensive cryptocurrency to ethereum users each day, Compound has created a system enticing users to change how they use the protocol to maximize COMP.

“Yield farming” can take many different forms, but there are two leading ways savvy DeFi users are leveraging COMP’s public launch to increase their returns:

While many have been tending to their fields with relative ease, there are risks in yield farming.

Tony Sheng, an investor that works with the Ethereum-friendly crypto fund Multicoin Capital, recently identified five risks yield farmers face. These risks threaten “some or all” of users’ funds:

Qiao Wang, a former executive at blockchain research firm Messari and a popular cryptocurrency markets commentator, also noted that there’s a chance the Compound market could collapse like mortgage-backed securities in 2008.

Wang added that the high yields that one can earn by using DeFi are being “subsidized by the poor retail traders who consistently lose money on centralized exchanges.”

The fear is that by creating a system that entices holders of relatively volatile assets to take on extreme amounts of leverage, a small liquidation event or a bug could have cascading effects, wiping out much of or all of the system.

Also, as aforementioned, Compound Labs is looking to propose actions that may make COMP’s distribution more stable and fair. Should these risks and actions come into play, the yield farming craze is likely to slow.

COMP’s public launch has been one of the biggest growth events for the cryptocurrency market since the 2017/2018 bubble.

COMP’s launch in and of itself caused growth in the DeFi ecosystem of 50% in a single week, according to DeFiPulse.com. And just a week after its launch, the cryptocurrency is valued at nearly $1 billion as aforementioned, putting it amongst some of the most entrenched altcoins.

It is likely that other protocols will follow suit.

COMP’s launch, even if prices crash from here, show that launching a governance token with a proper incentive structure can increase the adoption of DeFi while also creating economic value.

The post What Is COMP? A Deep Dive Into Ethereum DeFi’s Latest Trend appeared first on Blockgeeks. 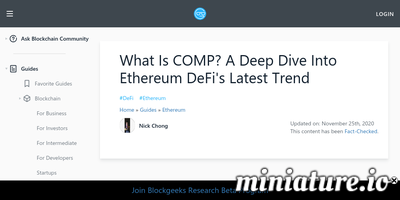