What Makes Entertainment Tech Worthy of Being Award Winning?

Entertainment is becoming increasingly driven by technology, with some of the largest sectors of the entertainment industry being tech-centric. While movies, television, and music are still massive sectors, the likes of digital gaming and streaming platforms have risen to the fore, with the technology that drives them continuing to develop.

Even entertainment in its rawest form, sport, has embraced technology to improve traditional sports. Soccer, cricket, hockey, and football all utilize video technology and sensors to ensure just decision-making in contests. As companies continue to explore new ways to innovate through technology, entertainment only gets better, with major awards ceremonies recognizing the innovators of tech in the industry.

Apart from some digital tuning and the increase in speaker performance, one might assume that music goes as far as the talent on stage can take the medium. However, an emerging technology is taking music to new heights – as well as many other industries. Just as it is set to be the basis of connected cars and smart cities, 5G is also revolutionizing the live music experience.

On the IBC2019 Innovation Awards shortlist stands Vodafone Romania, which showcased the power of 5G technology by hosting a live band with a young guitarist who joined those on stage via a live-streamed hologram. The project narrowly missed out on the award, ceding to SailGP’s innovative and environmentally considerate coverage of the global sailing championship, but this still proves that once 5G is established, it could revolutionize live music.

Video gaming has become a titan of the entertainment industry, with the tech-based sector continuing to evolve and deliver a better product to its massive audience. While big-name publishers like Activision, Electronic Arts, and Nintendo often dominate sales, indie developers have also managed to stake a claim in the vast landscape, with their innovations being recognized at major awards ceremonies.

At The Game Awards of 2019, the most recent ceremony, the likes of Control, Death Stranding, and Sekiro: Shadows Die Twice were all tipped for greatness – and all landed major awards – but it was Disco Elysium from Za/um that claimed the most accolades at the major gaming event. Having received universal acclaim for its remarkable depth, freedom, customization, and storytelling, Disco Elysium then landed awards for Fresh India Game, Independent Game, Narrative, and RPG.

Not confined to the power of the latest console systems, online gaming continues to expand across the vast open space that is the internet. The iGaming sector – that of casino gaming online – has become huge over the last decade, with the competition driving further innovations. Despite the seemingly restrictive form of games, developers have been able to advance the entertainment value of the online titles, with IGT winning the most recent awards of Slot Provider of the Year and Best Slot Game at ICE London 2020.

The games development firm IGT has won many awards since its inception in 1990, which is a credit to how the company continues to build upon the tech behind its games to produce a better product. Released back in 2012, Cleopatra was one of IGT’s first major hits, but they wanted to push it further. IGT has since released four more games in the series, also offering demo versions of these online slots to demonstrate the advancements made in the series to fans of the original. The most recent, 2020 release in the franchise is Cleopatra Gold, which is already tipped to be an early frontrunner come awards season.

Although taking place on a smaller screen, there are certainly technological innovations at work in the world of mobile gaming. Many developers are fixated on developing games that continue to intensify the freemium model, but the true innovators in the sector have embarked on a journey of bringing top-class gameplay to the mobile space, with Gladiabots exemplifying this feat.

The winner of the Excellence of Innovation award at the 15th International Mobile Gaming Awards, Gladiabots allows the player to plan everything ahead of time in the real-time strategy game. The developer, GFX47, has been hailed for offering a huge amount of creative freedom to mobile players through the title, with some seeing the game as a pioneer in an innovative new genre.

He’s been an innovator in the industry for years, but it was this year that Andy Serkis received one of the highest honors for his contributions to film. At the 2020 British Academy Film Awards, Serkis landed the Outstanding British Contribution to Cinema accolade, marking his pioneering efforts to evolve the art of performance capture.

The development of remarkable digital technology by Serkis’s company, The Imaginarium Studios, has enabled actors to bring characters like Gollum in The Lord of the Rings, Caesar in Planet of the Apes, and Ulysses Klaue in the Marvel Cinematic Universe to life on the big screen. Since he appeared in the epic The Lord of the Rings trilogy from 2001, Serkis’s work has brought motion capture technology into the filmmaking mainstream.

These award-winning individuals and companies continue to drive the entertainment industry forward by applying new and exciting technological advances to creations within their respective sectors.

The post What Makes Entertainment Tech Worthy of Being Award Winning? appeared first on The Merkle Hash. 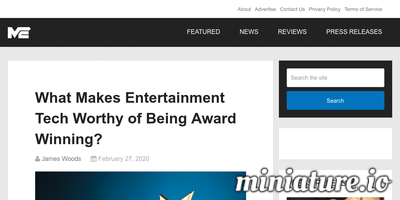 Domen Zavrl: What Is Cryptography?

This Chinese City Is Launching a Blockchain Notary Program