A few days ago, investors were anticipating bitcoin’s next leg up as the cryptocurrency soared to $9.8K – the highest level seen in almost 12 days. This upward move came as the stock market also enjoyed noticeable gains.


However, a lot has changed over the past 48 hours. The top crypto has registered a strong reversal from the highs posted earlier in the week. It is now valued at $9,289.72 at the time of publication – a drop of at least 5 percent.


Unfortunately for the bulls, the growing correlation to the equities could spell trouble for the BTC price in the near-term. According to one analyst-cum-trader, bitcoin is unlikely to surge past $10K this year. In fact, the said analyst, Tony Vays, sees BTC remaining stuck within the $6k to $10k range for the majority of this year.


Bitcoin has experienced significant selling pressure in the past two days despite the positive report that emerged on Monday regarding PayPal’s plans to integrate cryptocurrencies.


While most bitcoiners were speculating that the cryptocurrency was already showing signs of decoupling from the traditional stock market, the opposite has been the case this week: BTC and stocks are now 95% correlated. Notably, the surging coronavirus infections in major US states coupled with the grim unemployment data released on June 25 (nearly 1.5 million new jobless claims) rattled investors on Wall Street.


This data, according to Tone Vays, suggests that the stock market could pull back by around 400 points (or 12 percent) in the coming days. And with the current eerie BTC-equities correlation, a correction in the stock market will likely cast a dark shadow over the bitcoin market. Mr.Vays explained during the latest episode of Trading Bitcoin:


“Like I’ve been saying for months now, I have no reason to walk away from my prediction early in the year that Bitcoin is going to get stuck between $6,000 and $10,000 for the majority of this year.”


Vays also called attention to BTC’s daily Relative Strength Index (RSI). The RSI is a momentum-based indicator that measures the strength of bitcoin’s recent price changes in order to identify its overbought and oversold conditions.


According to Vays, bitcoin’s RSI  broke below a key trendline this month, while the coin’s price is actually higher than it was last month. This notable divergence is quite bearish for bitcoin, per the veteran trader.


Additionally, the funding rate on BitMEX exchange is presently in the favor of bullish traders, which means that these traders “are a little bit overzealous to the downside.” Combined, these forces could drive BTC to $7,000 should the bears take charge of the market.


Perhaps it’s worth pointing that Vays accurately called the $3,700 bitcoin bottom back in March after the king of cryptocurrencies suffered a steep downturn during the Black Thursday fiasco. 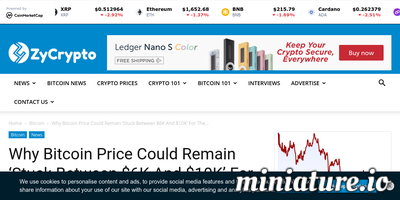