CNBC “Mad Money” host Jim Cramer has famously labeled bitcoin as an “outlaw currency”. But now it would seem that Cramer has jumped on the bitcoin bandwagon. After his interview with Anthony Pompliano, the CNBC host is now convinced that bitcoin is a prudent investment against the backdrop of endless money printing by central bankers.


Jim Cramer appeared in the latest episode of The Pomp Podcast hosted by bitcoin permabull Anthony Pompliano, aka Pomp. During the interview, Cramer explained why he had decided to invest in bitcoin after years of skepticism.


Besides Pomp selling him on the merits of bitcoin, Cramer stated that he believes BTC’s fixed supply puts it ahead of other fiat currencies and other asset classes. Specifically, he cited the Federal Reserve’s decision to unleash a $3 trillion stimulus package.


Pomp and Cramer also discussed the changing beliefs across different generations in regard to wealth preservation. Cramer noted that up until now, he had invested in gold, real estate, and masterpieces to protect his wealth against the oncoming inflation.


The CNBC host has, especially, been a huge fan of gold, with at least 10% of his portfolio allocated to the precious metal. He is, however, concerned that his kids will not share the same opinion.


For Cramer, bitcoin and gold are more or less the same, and with the ongoing worldwide economic downturn, you should buy one or the other. “We’re on a collision course, which makes me feel great about the gold I own, but I do feel that it’s perfectly logical to add crypto to the menu,” Cramer further posited.


Not The Only High-Profile Investor Making A Foray Into Bitcoin


2020 has been a great year for bitcoin adoption.


Recently, Barstool Sports founder Dave Portnoy purchased a substantial amount of BTC after a discussion with the Winklevoss twins. Perhaps most important, though, is renowned billionaire investor Paul Tudor Jones who invested in bitcoin to hedge against the inflation he sees stemming from Fed’s money printing.


These new bitcoiners’ interest in bitcoin is likely to usher in the next wave of retail and institutional investors to the burgeoning market. 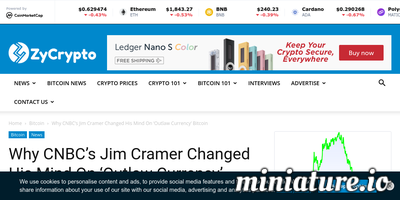 Americans don’t want to give up their paper money, but they should
5