Some investors are still wary of a March-like market correction. With crypto markets, you can never predict, of course. For instance, who could have foreseen such a massive crash in mid-March, and who could have also seen the swift recovery from the painful lows?


Ethereum has recovered over 120% from the lows of March. However, the ETH rally that was witnessed a few weeks ago as the crypto set its sights on $250 seems to have taken a breather for now. The second-largest cryptocurrency in the world is now hovering at around $227. Yet a respected fund manager believes ETH is due for a significant upsurge based on one key catalyst: DeFi.


The ICO Boom That Propelled ETH To Its All-Time High


The ICO (Initial Coin Offering) craze of 2017 will not fade from the memories of the crypto community anytime soon. Besides birthing a wave of countless ethereum-based projects, it led to an increased demand for ETH which ultimately contributed to a meteoric price rally.


The ICO tokens raising funding via Ethereum’s public blockchain pushed the coin’s market cap higher as the crypto tickled the underbelly of $1,450 in January 2018. At that time, cryptocurrencies were seemingly on an unstoppable bull run. Unfortunately, the ICO bubble popped and the crypto market plunged to the devastating bear market of 2018.


Since then, the crypto market has not witnessed a rally reminiscent of the heady days of late 2017 to early 2018. In fact, most cryptocurrencies are yet to recover from the throes of the bear market. Ethereum, in particular, has not seen another powerful catalyst to propel its price higher since the demise of the ICOs.


Nonetheless, analysts believe decentralized finance (DeFi) is the next catalyst that will usher in the next major ETH bull market.


DeFi Will Trigger A 4000% Ethereum Growth


While it lasted, the ICO boom proved to have lit a large fire under the ETH bulls. But now analysts are looking up to DeFi as the ETH’s next boost. Chris Burniske, a partner at Placeholder, recently suggested that DeFi will actually have a much more profound impact on ETH price than the ICOs. He argued that the ICO boom “flexed Ethereum’s ability to perform 1 financial service: early-stage capital formation”, but DeFi will “flex Ethereum’s ability to perform all financial services.”


Burniske did not give a ballpark figure of how high DeFi will launch the ETH price. He, however, stated in another tweet that if BTC reaches $50,000 in the next bullish cycle, ETH should hit $7,500. Why ethereum will be valued at over $7k? Burniske explained that “to the mainstream, ETH will be the new kid on the block —expect a frenzy to go with that realization.”


Ethereum’s market capitalization currently stands at around $25 billion. A $1 trillion market cap would mean a growth of circa 4000% from the current level, and would subsequently put the price of ETH at $9,000.


Another Variable That May Fuel ETH’s Parabolic Rally


Besides DeFi, another variable that is likely to boost the price of ethereum is the upcoming ETH 2.0. This is the long-awaited iteration that will move ethereum to a proof-of-stake (PoS) security model, on top of introducing sharding and other scalability solutions.


The first phase of ETH 2.0 is scheduled for release in the third quarter of 2020. The initial date was set for July 2020, but the developers had to postpone in order to ensure that they address all the issues thoroughly.


Some analysts have even postulated that the ETH 2.0 upgrade will likely have a bigger impact on the crypto markets than bitcoin’s block halving in May which was rather underwhelming —at least so far. 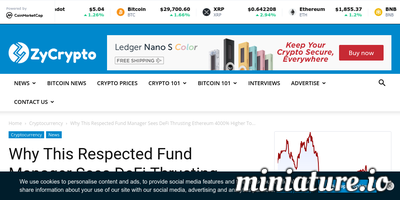