Pantera Capital, a cryptocurrency investment firm, has recently released its June investor letter. The report addressed a number of ongoing issues, such as inflation and the post-COVID recovery, but also paid a particular focus to Bitcoin and its perspectives in the year 2021.


According to Pantera Capital, the market mood goes heavily Bitcoin-pro, as shown in the below graph.


In its turn, the investment firm places a moderate reliance on the most popular cryptocurrency, stating that it may not be as prolific in the upcoming years as the public opinion conforms.


On the whole, Pantera Capital places the object of outperforming Bitcoin, thus diversifying funds to assets that may tend to be more profitable on a longer time span, the likes of which are altcoins.


Cryptocurrency and inflation: Demystifying the evident


According to the investment firm, Bitcoin’s price hype has a lot to do with the wave of inflation, provoked by the endless printing of money supplied into the economy in the aftermath of Covid-19.


As the prices of consumer goods go higher, the price of limited-number assets like Bitcoin will invariably go up too. This is the early sign behind the forthcoming bullish run – this time, spurred not by increased interest but rather by flowing liquidity.


“We believe that we’re currently in the early innings of a new crypto bull market cycle that should run until at least mid-2021.”


More Money Will Continue to Flow Into Altcoins


However, there is a moment – an inflection point – from which it would gradually go in an inverse direction. According to Pantera Capital, This means bull runs won’t always favor Bitcoin alone, but rather collectively with other altcoins, some of which will eventually perform better than the dominating crypto.


“But in 2021 — as the bull market matures — we expect for alts to gain a significantly larger market share relative to bitcoin.”


As soon as beginner investors get their hand in crypto and gain some elementary understanding through Bitcoin (which, in the majority of cases, is a number-one choice), they start looking for ways to experience something new. Altcoins come in as a suitable alternative for that.


Besides, being focused not on token properties alone, Pantera Capital also nurtures an interest in projects which go beyond the basics and develop applications that may integrate into the future digitalized economy.


As an example, these coins could be Polkadot, Matic Network, and StarkWare – which, despite being launched not so long ago, already boast of an advanced application that can handle a large number of transactions and consequently take blockchain and digital finance to the next level of scalability and adoption. 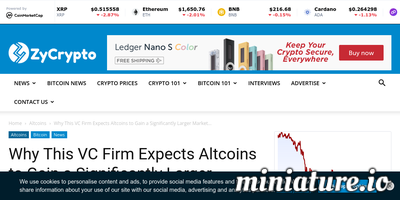