Jordan Belfort, the self-proclaimed “Wolf of Wallstreet” has moved away from his bearish views on bitcoin and now predicts the crypto asset might reach $100,000. Belfort, who has reinvented himself as a motivational speaker and consultant, says bitcoin unlike company stocks is more about “pure supply and demand.” He adds that the crypto asset is “free from the distortion of effectively printing more of your own corporate currency.”

Belfort’s remarks about bitcoin (BTC) were made during an interview with Fortune where he offered his take on Gamestop stock’s recent Reddit inspired price rally. While some observers have viewed the Gamestop price rally as another form of pump and dump, Belfort disagrees. Although he concedes that traders were “collectively pumping up these stocks” he, however, insists there is “no dump.”

Meanwhile, when compared to company stocks, Belfort concludes that the crypto asset’s fixed supply gives it an advantage over shares. The former penny stock trader argues that “if a stock stays up too long, the company keeps printing shares.” However, this continuing issuance of shares will lead to dilution of value.

On the other hand, bitcoin “does not have the equities’ problem that high prices tend to bring on more supply (thus) turning the surge into a swoon.”

On why he turned from being a bitcoin bear, Belfort again points to the crypto asset’s fixed supply as its key “advantage over company stocks.” He adds:

New investors will keep pumping the price, but the rush of new shares that deflates a soaring stock can’t happen.

In 2017, when the crypto asset surpassed $19,000, Belfort, who was sent to prison for nearly two years for fleecing small investors out of $200 million, predicted that bitcoin would crash and “go away forever.” The former penny stock trader argued then that regulators “would nix the coins.”

However, after seeing the crypto asset set another all-time high, Belfort says he “now believes it’s here to stay since a fatal regulatory onslaught hasn’t happened.”

What are your thoughts on Belfort’s changed stance on BTC? You can share your views in the comments section below. 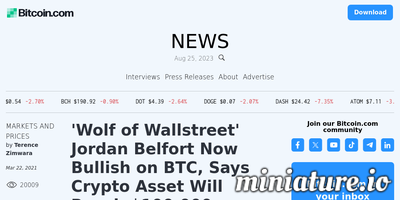