Home /
Crypto Currencies World /
XRP Has Been Setting Lower Highs For Over 900 Days Now. Where To From Here?

XRP Has Been Setting Lower Highs For Over 900 Days Now. Where To From Here?

The past couple of years have been quite distressing for XRP holders. After registering a meteoric bull run to $3.84 in January of 2018, the digital asset succumbed to selling pressure as it plummeted hard with the rest of the cryptocurrencies.


While other cryptos have managed to somewhat escape the clutches of the bears, XRP has been stuck in a rut. The coin is now down over 94 percent from its all-time high and even recently relinquished its spot as the world’s third-largest cryptocurrency to Tether.


One well-known technical analyst recently indicated that overall, XRP has been setting lower highs for more than 900 days now. This is bad news for XRP investors as the weakness could go on before a significant uptrend.


XRP Has Been Downtrending For 901 Days


Notably, XRP is not the only major crypto that is still below the ATHs. However, it is the only one that has not been able to recoup the majority of the losses during “mini alt-seasons”. This was noted by Pentoshi, the lead technical analyst at crypto research house BlockFyre.


Pentoshi observed that the fourth-ranked crypto has been on a steady macro downtrend for 901 days now. In his view, XRP could be headed for a fresh decline to $0.15 in the near future – but there is a silver lining. He believes XRP at 15 cents would be “an attractive long-term entry” that would mark the beginning of a new bullish cycle.


One key factor that could accelerate XRP’s decline in the short-term is possible dumping by one of the largest scams in the world, PlusToken. Over the past week, PlusToken has been transferring XRP and other tokens to different addresses in a bid to obfuscate their origins before selling.


In particular, a wallet associated with the Ponzi holds at least 485 million XRP, as noted by the founder of xrplorer, Thomas Silkjær, who also stated that a significant number of XRP tokens was sent to HBTC, Huobi, and OKEx earlier this week.


Based on historic data, downward price action has always followed PlusToken’s offloading activities. The big question right now is whether the XRP market will be able to absorb such intense selling pressure or will it sink lower to $0.15? Only time will tell. 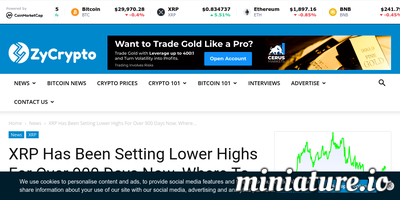 Buy These 3 Stocks to Cash in on the Housing...