Home /
Crypto Currencies World /
XRP is Being Accumulated as Price Remains Below $0.2

XRP is Being Accumulated as Price Remains Below $0.2

The individual number of holders of a specific crypto asset or financial instrument will always be of interest to onlookers. When it comes to XRP, it seems as if there is some whale-like action going on right now.


Not everyone cares much for XRP, primarily because parent company Ripple is targeting the financial industry.


Who is Buying up XRP?


For quite some time now, there have been concerns as to whether XRP is a security.


For now, the answer to that question is negative, but it will remain a point of debate for the future.


A chart created by Santiment shows that the number of people owning big stacks of XRP is on the rise.


There are now more addresses holding 10 million XRP or more than ever before.


Nearly 500 people own at least $2 million of this asset, although these will include Ripple’s own wallets, obviously.


Others may depict exchange balances, rather than individual users.


What this means for the future XRP value, is a tough question to answer.


Less liquidity should help catapult the price in an upward direction.


Markets aren’t always rational, however, thus anything can happen to Ripple’s native asset.


For now, the price won’t rise above $0.2, which makes a lot of holders rather twitchy.

being accumulated price remains below 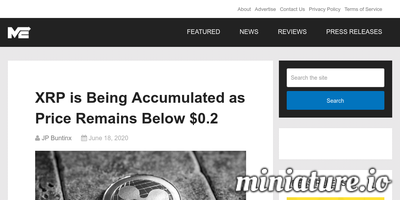 Nomura Partners with Ledger and CoinShares...