After two days of declining, the XRP stabilized, and on Tuesday it is trading at $0.2364.

On D1, the XRP/USD quotations remain inside the long-term bearish channel. However, after a convergence on the MACD, the resistance line of the mid-term channel was broken out. This situation means the development of a mid-term correctional phase which may turn into a full-scale reversal of the current trend. At the moment, the correction has reached 23.6% Fibo related to the previous impulse of declining, but later the quotations may rise to 38.2% ($0.3012) and 50.0% ($0.3405). Looking at the chart, you can notice that such growth will not only allow overcoming the long-term resistance level of $0.2770 but also secure above it.

On H4, the ascending channel is stable. Simultaneously, the Stochastic has formed a divergence and a Black Cross in the overbought area, which may signal a short-term decline. To develop a decline, the market needs to break out the support line near $0.2260. The aim of the decline will be at $0.2050. This decline will be testing, aimed at securing on the positions.

The transborder payment technology by Ripple is highly demanded. No less than 38 of 100 major banking figures have tested this technology and integrated it into its financial mechanisms. Currently, the largest bank to use the technology is the Mitsubishi UFJ Financial Group.

Many large international banks work with Ripple via other companies – such as the Bank of America, working via Merryl Lynch. This way, there might be many more banks really working with Ripple and its technology.

Earlier in January, at the CTFC level, there was voiced an opinion that the XRP was not a security. Simultaneously, the BTC and ETH can be considered goods or assets while the XRP status is not defined. It does not look like serious stress for the XRP as it has been long discussed, however, there is little optimism in this.

It has long been argued if the XRP is viable, what status and level of attractiveness it has. However, while Ripple is developing its technology, and the latter is popular, nothing is likely to be a serious threat to the coin.

Disclaimer: Any predictions contained herein are based on the authors’ particular opinion. This analysis shall not be treated as trading advice. RoboForex shall not be held liable for the results of the trades arising from relying upon trading recommendations and reviews contained herein. 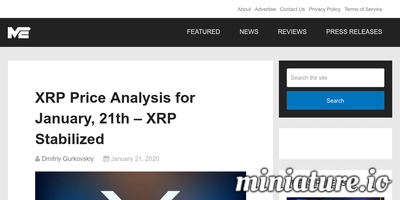 Why Being Good at Technology is an Advantage...