On Tuesday, June 9th, the XRP is moving steadily inside a narrow flat. It is generally trading at 0.2031 USD.

On D1, the technical picture of Ripple has not changed greatly. The pair keeps testing the lower border of the ascending channel, trading near 38.2% Fibo. At the current stage, this may mean that the pair is accumulating power for the development of the ascending dynamics. On the MACD, the Golden Cross is working off, and the histogram remains in the positive sector. These are the signals of further growth. The aim is currently at 50.0% Fibo or 0.2310 USD.

On H4, the picture is similar. The quotations are trading at the lower border of the ascending channel between 38.2% and 50.0% Fibo. The aim of further growth is the same ad on D1 – 0.2310 USD. A breakaway of 50.0% Fibo will mean the continuation of the growth. The Stochastic has formed a Black Cross in the overbought area and goes on declining. Generally speaking, further ascending of the XRP looks more probable than a decline to 0.1704 USD.

Scandals are raging around the XRP all the time, becoming the usual informational noise. Today, a trader Piter Brandt is stating that the XRP is a fraud scheme prone to all sorts of manipulations. This is the reason by which he explains the fact that the XRP has not yet fallen to zero.

Earlier, a transaction of 700 million XRP was noticed in the Bithumb exchange. The sum might have amounted to 140 million USD but not necessarily it was an unlawful scheme: Bithumb could easily carry out an inside transaction of tokens. If so, there is nothing criminal about it.

This year is not too lucky for the XRP. In the first quarter, the sales dropped by 87%, and the company demonstrated the worst results in the crypto market in terms of capitalization.

The post XRP Price Analysis for June 9th – XRP Sitting in a Flat appeared first on The Merkle News. 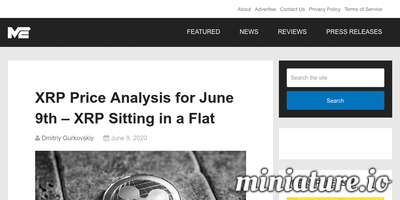