The number of tweets around Ripple’s XRP exploded to a new all-time high on July 9 on the heels of a significant upward move in the price of the coin. Interestingly, this saw XRP’s tweets exceeding those of ethereum and also bitcoin — for the very first time.


XRP has been treading water for the better part of this year. While bitcoin and other major cryptocurrencies rallied, XRP failed to make any meaningful progress. Only recently that the coin’s bulls mustered strong momentum to push it higher. To put things into perspective, XRP surged over 20 percent since Monday to retest 20 cents.


This surge did not go unnoticed by the XRP community as the engagement on Twitter skyrocketed. The digital asset saw approximately 29,143 tweets yesterday, according to data provided by BitInfoCharts.


These were 5,000 more than the tweets that mentioned the king of cryptocurrencies and marked a first in history. In addition, XRP’s engagement outpaced ethereum’s by around seven times. What makes this even more interesting is the fact that XRP’s market capitalization pales in comparison to that of both bitcoin and ethereum.


As aforementioned, the crescendo of tweets around XRP appears to be related to the recent upsurge. However, XRP has recoiled back to $0.1965 at the time of publication after shedding 4.39% of its value in the last 24 hours.


Moreover, XRP has continued to lose ground on the market cap front despite the latest advance. After briefly displacing ethereum for the second position back in 2018, XRP held on to the third spot on the crypto rankings for quite some time until recently when it was usurped by Tether’s USDT.


Part of the reason why the now fourth-biggest cryptocurrency has continued to lag behind its peers is due to the disappointment around its utility. Ripple — the San Francisco-headquartered fintech firm behind XRP — has been unable to mobilize momentous support for its XRP-based payment service, the On-Demand Liquidity (ODL, formerly known as xRapid).


Nevertheless, institutional investors have been pouring into the asset of late. For example, Will Meade, the founder of a $1.4 billion hedge fund, recently announced that he had made his first XRP purchase and he hopes the crypto-asset hits all-time highs soon. It sure looks like the XRP community is also getting fired up once again. 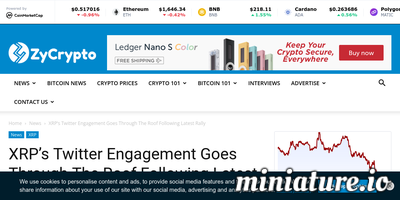 Crypto Lender BlockFi Could Go for IPO in...