The decentralized finance (defi) realm continues to heat up with concepts like yield farming, but another scheme called defi flash loans has also grown exponential. On Monday, the noncustodial lending protocol Aave issued $138 million in loans with zero collateral.

Since the last week of June, defi flash loans have increased by 809% as the protocol Aave is issuing anywhere between $80-100 million in flash loans per day. Data shows that Aave issued over $138 million on Monday and the pace continues to trend higher.

The word “Aave” is a Finnish term to describe a ghost, as the noncustodial platform allows for lending interest rates to be guided by algorithms directed by the supply and demand. Flash loans are used for significant arbitrage opportunities and they allow people to obtain handsome loans without collateral.

As news.Bitcoin.com reported a few months ago, flash loans have been leveraged in significant hacks too. For instance, on February 14 and 18, the lending platform Bzx saw $954,000 siphoned from two flash loans.

During the first big flash loan hack, the so-called hacker got 10,000 loaned ETH from the application Dydx and snagged 112 wrapped bitcoin (WBTC) from the defi protocol Compound.

These days millions of dollars in flash loans are being issued every day without collateral and this isn’t something you see in traditional finance at all.

Flash loans are risky and people who execute the concept need to make sure everything is complete before time runs out. Essentially a person who performs a flash loan leverages their assets to drop the price across markets in order to trigger defi apps with oracles to sell at the desired spot price.

Individuals leverage defi apps like Kyber’s Uniswap, Aave, Bzx, Dydx, and Compound. Aave-based flash loans were invoked in January and the platform has seen a massive increase in use during the last 30 days.

Since defi has been popping lately flash loans have grown immensely but pushed out of the limelight by yield farming concepts. Yield farming is basically leveraging various defi assets in order to produce the most return in the quickest amount of time. Similar to flash loans yield farming widens the chances for new price arbitrage.

So far besides the big flash loan hacks, both flash loans and yield farming ideas have become all the rage. However, skeptics are curious about how flash loan users will react if a major black swan event like ‘Black Thursday’ on March 12, liquidates a massive quantity of counterparties.

$138 million worth of flash loans on Monday shows just how large the risk can get. Still, a recent report published by Tokeninsight notes that this is just the beginning, as the “[defi] lending sector experienced strong growth in H1 2020.”

“Compound Finance (COMP) and Aave (LEND) delivered 2x and 5x returns against BTC throughout the six months,” the analysts from Tokeninsight’s report note. 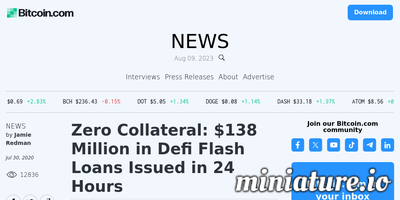 Ethereum Is the Best-Performing Asset Class of...